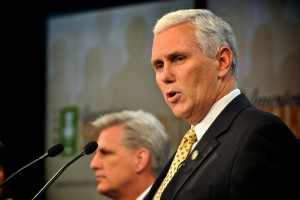 Governor Pence unveiled his budget recommendations for this session, with education as the main priority.
“I can’t tell you how excited I am about what I sense is a real common purpose that has developed in the months leading up to this session,” Pence says. (Photo Credit: House GOP)

Governor Mike Pence revealed his recommended budget for fiscal years 2016 and 2017 Thursday, with education priorities demanding most of the funds.

But, Statehouse Democrats say the governor’s budget proposal doesn’t tell a true story when it comes to increasing education funding.

Pence wants to increase K-12 funding by two percent in 2016 and one percent in 2017, which adds up to a $200 million increase over the two years. Pence’s plan would fund charter schools more than in the past, allocating an additional $1,500 per pupil for students in charter schools. Right now, each Indiana district receives a minimum of $4,280 per pupil, regardless of school type.

“In the category of funding, the first priority of this budget will be expanding opportunities for our youth in Indiana, from pre-k education to higher education,” Pence said Tuesday.

Chris Atkins, Office of Management and Budget director, says the $41 million specifically set aside for charter schools would reduce inequity between funding of charters and traditional public schools. 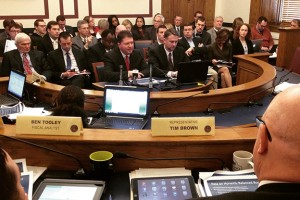 “We’re concerned that some higher quality charter operators are not willing to look at locating here or investing here because of our charter financing system,” Atkins says.

“People are confused at home,” Goodin says. “As I speak to constituents, they say, ‘Hey, they gave you 200 million more dollars in education.’  Well okay, yeah but here’s where this money went.  So that money’s not coming back to communities like it should.”

Atkins says Pence’s goal is increasing overall education funding and points out that the governor’s proposed budget is only the first step in a nearly four month budget writing process.

Another part of Pence’s proposal involves the state’s new pre-k pilot program, On My Way Pre-K. Pence suggests funding the program at the same rate – $10 million each year – per year through the two-year budget cycle. This is a change from the language of the law, which only sets out requirements for the current fiscal year. By suggesting the state allocate funds to the program for more than one year, Pence is setting the stage to expand the program, something participants have expressed they want.