Five states have been awarded federal money to increase access to high-quality preschool programs – money some say Indiana could have used. 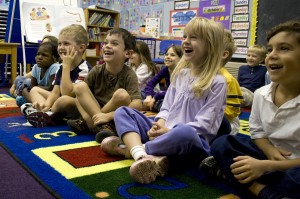 Many have wondered what will Indiana will miss out on without a federal pre-k grant that has now been awarded to five other states.

Alabama, Arizona, Hawaii, Montana and Nevada will receive money specifically intended for states with either small or no state-funded preschool programs, to help them develop such initiatives. Grant amounts ranged from $2 million to $20 million; the five states’ awards combined totaled over $55 million.

Indiana was one of 16 states that fit the eligibility requirements for this grant – and a group of state education leaders had been preparing an application. But Governor Pence pulled the application in the eleventh hour, just days before it was due.

What will these other states get that Indiana took itself out of the running for?

Education reporter Derek Brouwer with the Billings Gazette in Montana breaks down what his state is hoping to use the new money for (Montana received a development grant worth $10 million a year for four years):

Grant funds will be used to expand preschool access and support programs in 16 high-needs communities, half of which are on Indian reservations. Over four years, it will serve some 6,000 4-year-olds, according to the Governor’s office.

Two-thirds of the money would be available directly to preschool providers and education agencies in those areas. The rest may be used to build state preschool infrastructure and quality improvements. […]

According to the grant abstract, program goals include:

Brouwer says the grant complements another $37 million in preschool funding that Montana’s governor plans to request from his state legislature.

Those last four bullet points sound similar to the aims laid out for Indiana’s “On My Way Pre-K” pilot program, a Gov. Pence-led initiative. And many people have told StateImpact they think Pence missed the mark big-time to help that program along by halting this grant application.

“I think what that [money] was really supposed to do was to solidify a state system, and even though we’ve got pieces of the system, that $20 million could have made it much easier and much more comprehensive,” says Karen Carradine, a leader for pilot efforts in Lake County.

Dennis Rittenmeyer, the head pilot organizer in Lake County, says potential pilot donors have brought the issue up to him.

“Several donors that I have talked to, even though in some cases they still are agreeing to support this effort, have said they don’t like it because it really is the state’s responsibility, it’s not private foundations’ responsibility to run ongoing public education,” Rittenmeyer says.

Some have accused the governor of putting his own political ambitions ahead of what’s best for Hoosier students by refusing federal help from a Democratic president. President Barack Obama’s 2014 budget request would create a federal-state partnership that ensures universal access to voluntary, high-quality preschool for all 4-year-olds from low- and moderate-income families, with incentives for states to provide high-quality preschool for these children.

In an op-ed for the Indianapolis Star, Pence said he did not want to expand Indiana’s pilot program before it was even up and running:

An important part of our pre-K pilot is the requirement that we study the program so we understand what works and what doesn’t. I do not believe it is wise policy to expand our pre-K pilot before we have a chance to study and learn from the program. While accepting federal grant dollars can at times be justified to advance our state’s objectives, when it comes to early childhood education, I believe Indiana must develop our own pre-K program without federal intrusion […] More federal dollars do not necessarily equal success, especially when those dollars come with requirements and conditions that will not help — and may even hinder — running a successful program of our own making.

Rittenmeyer says although he didn’t agree with the governor’s decision, he understood it.

“If you agree with his personal predisposition on these matters, his decision made some sense,” Rittenmeyer says. “If you have an experimental program going on in your state and in comes $20 million a year for four years to do what the government wants you to do, is that going to confound the project you already have going? There’s a reason to believe that would be true.”

Also coming to the governor’s defense are those who still see the research on outcomes of large-scale preschool programs as mixed. Neal McCluskey, Associate Director of the Cato Institute’s Center on Educational Freedom, addressed this in a blog post for the libertarian think tank, and spoke about his thoughts to Politico:

“For the sake of the children everyone wants to help, the taxpayers who would bear the costs of new and expanded programs, and just good policymaking, it needs to be acknowledged that the research doesn’t support the conclusion that large-scale programs reap lasting benefits…That’s often not what people want to hear, but policies must be based on the evidence we have.”

An analysis released today by the White House Council of Economic Advisers describes the economic returns to investments in early childhood education, including a reduced need for remedial education as well as long-term outcomes such as increased educational attainment, increased earnings, improved health, and decreased involvement with the criminal justice system.

The White House says that since 2013, 34 states have increased federal funding for their preschool programs. In that same time frame, more than 30 states and cities have established new programs or expanded access to preschool.