As 2014 comes to a close, school leaders and teachers have a lot to think about as they move into the second semester of the school year – how can we keep moving forward? What can we improve? 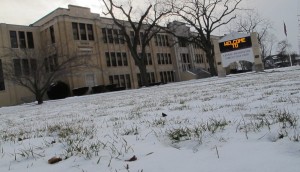 Washington High School in Indianapolis is one of the failing schools members of the Committee on School Turnaround are trying to help.

In particular, the nine state schools considered ‘failing’ will be looking to take any positive steps that they can. And the State Board of Education‘s Committee on School Turnaround is looking for ways to help.

The panel met Monday for the final time this fall to review state intervention tactics at those nine schools and discuss potential changes. They’ll present their recommendations to the full state board at its Dec. 3 meeting.

To date, the state has established nine turnaround academies under one of three models:

Four schools currently use the TSO model – Indianapolis Public Schools’ Emma Donnan, Emmerich Manual and Carr Howe, as well as Roosevelt Academy in Gary. Evansville’s Glenwood Leadership Academy operates as a Transformation Zone. The four remaining schools are in limbo, and its up to the state board how each will move forward.

As we’ve reported, the transformation zone established by leaders in the Evansville-Vanderburgh school district has already seen success, and it sounds like committee members think this model could work similarly for districts like IPS.

The district is already in talks to regain control of Arlington High School, where current TSO Tindley Accelerated Schools plans to drop out after the current school year.

The state board has also bounced around a handful of ideas for the district’s three other failing high schools – Washington, John Marshall and Broad Ripple – which up to this point have all been working with lead partners.

Stephanie Wang of the Indianapolis Star reports that a Transformation Zone encompassing all four schools could be a great option for IPS leaders:

“We believe the transformation zone model will be one that will be beneficial for the district,” said IPS Superintendent Lewis Ferebee, touting the idea of “collective intervention” instead of juggling several state-contracted companies working in different schools. […]

The transformation zone model could become an official form of state intervention, with schools and districts still accountable to the state board for showing improvement.

[T]he suggestion of an IPS transformation zone is also a sign that state officials — among other stakeholders — are expecting huge reform progress out of IPS’ newly elected board members, who ran on platforms of increased school autonomy and won backing from local reform groups, including The Mind Trust.

Under the state’s accountability system, the state board intervenes after a school receives F’s for six years in a row.