Another day, another discussion of power among state education leaders. 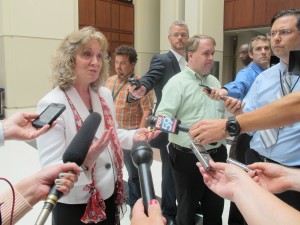 State Superintendent Glenda Ritz speaks to reporters outside the State Board of Education meeting in July, when she engaged with board members about her duties as board chair.

Leadership of the Indiana Chamber of Commerce says one of the group’s top legislative priorities for the 2015 session is pushing to make the position of State Superintendent of Public Instruction appointed beginning in 2016.

Currently, Indiana is one of 12 states with an elected superintendent, according to the National Association of School Boards of Education. Members of the State Board of Education are appointed by the governor.

Chamber president Kevin Brinegar says he believes the superintendent, the head of the Department of Education, should be appointed similar to the heads of all other state agencies– a consistent position of the Chamber.

“This will be my 34th session, and for most of that time we’ve had the superintendent and the governor not on the same page with respect to major issues,” Brinegar says. “Often that’s because they’ve been of a different party, and in some cases they’ve even been of the same party but the governor didn’t appoint that person. We need consistency and one agenda for education that voters can assess and determine whether they like it or they don’t like it in the next election.”

Brinegar says the Chamber plans to speak up “louder this session than ever before” with respect to proposed legislation in favor of appointing the position. If such legislation is unable to pass, he says the Chamber advocates that members of the state board be allowed to select the chair of that body.

The state Constitution requires there be a State Superintendent, but leaves the method of selection up to legislators. Since it’s written into state law, reformers would need to push for an amendment to make the position appointed by the governor.

This isn’t the first time one of Indiana’s education advocates has suggested making this move. Dysfunction has become somewhat of a norm at state board meetings, with issues typically pitting current superintendent Glenda Ritz (a Democrat) against members of the board she chairs – most of whom were appointed by former governor Mitch Daniels or current Gov. Mike Pence (both Republicans).

Adding fuel to the fire is the creation of Governor Pence’s own education agency, the Center for Education and Career Innovation, which Ritz has said she sees as an affront to her own agency.

Brinegar points out that leaders in the Chamber and elsewhere can’t help but notice when conflict clouds the group’s agenda.

“I would challenge every one of you to watch just one meeting of the State Board of Education, and you will see how incredibly dysfunctional this is, and how poorly it is serving the children and the parents of the state of Indiana,” Brinegar says.

But legislative leaders say they’re wary of taking the choice of a schools chief away from voters.

“The political reality is when you have two Republican supermajorities — all statewide offices except for the one that ought to be appointed — it doesn’t have a very good appearance to make that change right now,” Bosma says. “But one thing I know [is] the bickering on the front page of the paper has to stop, or the General Assembly will take action, and it will probably be action nobody will like.”

Daniel Altman, spokesman for current Superintendent Glenda Ritz, says voters deserve the right to say how their children are educated.

“Two years ago, Hoosier voters clearly said that they wanted Glenda Ritz to be Indiana’s top education official and a vital check and balance at the Statehouse,” Altman said. “Taking such an important and personal decision away from voters because of petty partisan bickering is short-sighted and simply wrong.”

Some of the Chamber’s other education-related legislative priorities include increasing funds for STEM education in the state’s colleges and universities, as well as increasing investment in preschool education to help develop statewide initiatives.