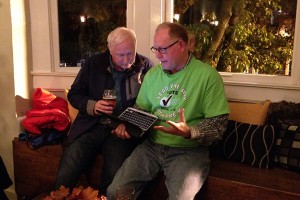 Pre-K 4 All committee member Dave Barker and BCSC Superintendent John Quick wait for election results to come in Tuesday night. The referendum lost by a little more than 1,200 votes.

Fifty-four percent of voters said no to a property tax increase that would have raised $12.6 million over seven years. This marks the second time the ballot measure has lost – voters also said no back in 2012.

Bartholomew Consolidated School Corporation Superintendent John Quick says he’s disappointed in the outcome, but pleased that his community has started discussions about pre-k.

“I think we’ve raised the bar for pre-kindergarten in this community and around the state by having this conversation,” Quick says. “Our goal was to go from good to great, and it didn’t work out this time but we’ll have to just go back to the drawing board. We’ll keep the conversation going.”

Quick and others say the issue felt different this year than in 2012. They cited a change in ballot language which allowed for a more precise description of what the tax money would be used for, as well as increased community outreach efforts had them optimistic for a win.

Quick reminds area families that all hope is not lost – the county still has a number of private and faith-based pre-k options, as well as a handful of public preschools funded by federal Title I money. He adds that district officials will not “abandon” low-income children.

“We certainly will spend some Title I dollars that direction and then we’ll have conversations with our community partners and other folks and say, ‘what are the next steps?'” Quick says. “We’re optimistic that we can help these students.”

BCSC leaders and community volunteers had been trying to raise money for scholarships at Busy Bees Academy in Columbus, a program that started five years ago thanks to financial support from a number of community organizations. Those groups originally committed funds for three years, extending to two more when the first referendum failed in 2012. With those funds disappearing in May 2015, district officials had said the future of what they call their own community pilot program hung in the balance of this referendum.

Cummins, Inc. is one of the area’s largest employers and one of Busy Bees’ biggest donors. Jeff Caldwell, Executive Director at Cummins, says his organization will roll up its sleeves and try to help school leaders work something out.

“That [referendum] was our plan A. I think since the populace has said no twice, ‘no we don’t think so, not in Bartholomew County,’ we have to think about what are plans B and C,” says Caldwell, who is also president of the BCSC Board of Trustees.  “We have to look at how does [pre-k] stack up against other priorities? And that’s a tougher discussion.”

Caldwell says the group may need to rethink how creative they get about paying for pre-k.

“I think maybe its’ different financing, and that’s kind of a state-level challenge, because there’s not much available to us other than property taxes,” Caldwell says.

How to pay for pre-k is a major discussion happening around the state. Groups in Indianapolis are looking for ways to support Mayor Greg Ballard’s citywide pre-k plan, and counties in the state’s pre-k pilot program continue to search for funds. On the statewide stage, Governor Mike Pence recently pulled Indiana’s application for a federal pre-k grant that could have meant up to $80 million dollars from the U.S. Department of Education.