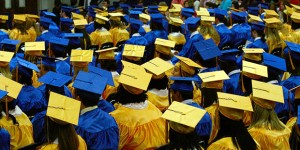 Elkhart Community Schools got more involved with students to improve the graduation rate among Latino students.

If you want to understand the high school dropout rate among Latinos in Indiana, Elkhart, Ind. is a good place to start.

Nationwide, the graduation rate for Latinos improved over the last five years, and Elkhart Community Schools is no exception. A few years ago, they saw one third of students dropping out, that number higher among Latino students. FiveThirtyEight’s Ben Casselman highlighted the district in a piece about the economics of improved Latino graduation rates. Casselman says students typically drop out when there is an opportunity to work a well-paying job, but that is changing lately:

Sometimes, though, it takes more than economic incentives to keep students in school. That’s especially true in a place like Elkhart, where the unemployment rate was 5 percent in August and manufacturing jobs are readily available for those who want them.

“It’s hard to get an 18-year-old to think in the long term when they can get a job for $12 an hour,” said Draper, the Elkhart guidance counselor.

So Elkhart administrators began calling local employers and talking to them about how by offering jobs to teenagers during school hours, they were contributing to the dropout problem — ultimately leaving them with a less educated workforce. In some cases, the administrators worked with employers to turn the jobs into internships, earning students school credit. And they developed an after-hours school program to help students who needed to work during the day stay in school.

With that issue addressed, Elkhart Community Schools looked within the school walls to see what else they could do to prevent Latino students from dropping out:

They began scheduling summer meetings with parents of students who weren’t on track to graduate. They hired a social worker to chase down truant students and work with them to return to school. They restructured the advisory program so students have one advisor through all four years of high school.

But the real key, administrators realized, is intervening before students ever get close to dropping out. Elkhart Central Principal Frank Serge says they looked at the data and realized that freshman year is especially key: Students who earn at least 10 credits in their first year of high school are 50 percent more likely to graduate. So Elkhart reorganized its freshman class into “academies,” in which students stay together throughout the day, giving teachers a chance to compare notes on students and catch problems early.