Once upon a time, Jaime Burkhart would have been considered a “librarian.” 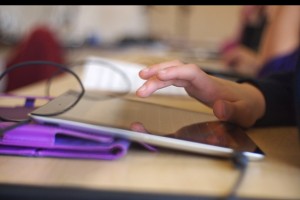 As technology finds its way into classrooms, librarians are seeing their roles in schools change.

iPads and the Internet have become a regular part of the classroom scene at Batchelor Middle School in Bloomington, where Burkhart works, as well as in many other schools across the district, the state and the country. And that means people like Burkhart are no longer simply checking out books.

“Librarians really are curating information, however that is,” Burkhart says. “Whether that be print resources or digital resources, we work really hard to select the right things for teachers so that we can support them in their curriculum.”

[pullquote]Librarians really are curating information, however that is.
–Jaime Burkhart, Librarian/Media Specialist[/pullquote]

‘Media Specialist’: What’s in a name?

To work in a school, certified librarians like Burkhart must also hold a valid teaching license in the state of Indiana. This allows them to know the standards they help support, so they can use their other skills to help teachers work effectively.

“When a teacher who has not previously incorporated a lot of technology into their lessons reaches out to me and says ‘I’m interested,’ of course I’m going to do whatever I can to support them, and help model lessons for them, find resources for them to make them more comfortable in doing so,” Burkhart says.

This type of collaboration is a critical part of Burkhart’s day. Right now, she’s working with eighth grade teacher Becky Boyle on a new project for Boyle’s social studies students. They squeeze into two student desks in Boyle’s classroom, facing each other, iPads and a stack of lesson plans splayed out in front of them. 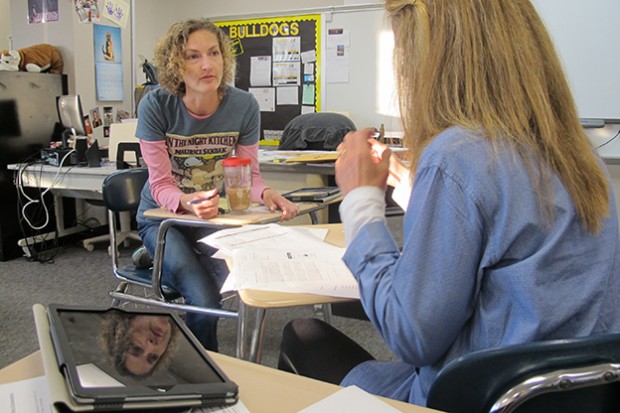 Boyle says she can’t put a number on how often Burkhart helps her – but she’s constantly thankful for it.

“This is big for me,” Boyle says. “Otherwise I would just have to kind of bumble through it.”

“And if we need to bumble, we’re bumbling together!” Burkhart chimes in. “It’s going to be good,” she reassures her colleague, smiling.

Burkhart is Batchelor’s only certified librarian-slash-media specialist. Every school in the Monroe County Community School Corporation has someone like her, with similar credentials…except one. Bloomington High School South, just a few miles from Batchelor, lost its librarian four years ago, during a round of referenda that threatened to cut all of Monroe County’s school librarians. The district avoided that fate when voters approved a new tax levy – but the principal at South High School decided to use the funds to hire a reading interventionist.

The library currently operates under the supervision of an aide – a “media specialist aide,” to be precise. Her name is Joanna Hahn, and prior to coming to South she volunteered for a number of years in the library at Summit Elementary, another MCCSC school.

“I really got to know how to process books, and just how the whole system worked,” Hahn says. “When I got this job [at South] then, I knew how to do all the basic stuff. I understood the programs that the librarians use.”

Hahn is quick to clarify that her position is different from professionals like Jaime Burkhart. She doesn’t have a teaching degree. She isn’t even certified in library science. She does more of the things you might consider typical “librarian” duties – ordering, labeling, and processing new books, helping students select their next read, and troubleshooting on library computers.

But some people wish South could bring back one of those upgraded, certified librarians.

In the same way some people argue that reducing school nurses could have a negative effect on student health and safety, others say eliminating professional school librarians is detrimental to students’ academic success. Some research has confirmed that reading scores in particular are positively impacted when school libraries are staffed by certified professionals who  can identify resources to meet student interest, staff needs and education standards.

[pullquote]If they had all the money in the world…of course you might as well have the most experienced person…but the money is limited.
–Joanna Hahn, Library Aide[/pullquote]

“If they had all the money in the world, if there was no limit, of course you might as well have the most experienced person with knowledge that I don’t have, but the money is limited,” Hahn says. “In this school, the person they’ve hired to do what she’s doing is making a really big impact.”

Hahn’s face lights up as she describes her love for the library and the kids who visit her there.

“The library is a very popular place to be,” she explains. “It’s a social place, it’s a comfortable place, it’s just a very welcoming place. I really enjoy the students, and I get to be in a position where I’m not grading them, I’m not punishing them, I’m just welcoming them for the most part.”

This is Hahn’s second year in South High School’s library, and she says she plans to stay as long as they’ll have her — which may only be until the seven years of increased taxes are up.

“This will be the fifth year, so we have three more years, this year, and the next two years,” Hahn counts. “Then we probably have to ask for another referendum.”