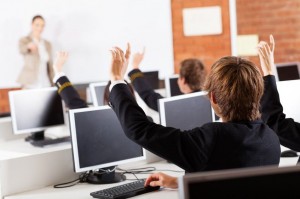 The panel touted Indiana's policy on school choice and what the state needs to do to improve.

A panel of national and local education leaders met in Indianapolis on Friday to discuss the future of school choice in the state and how other cities and states can replicate its success.

One of the things the Indiana education panel discussed was the success Indianapolis has with pushing forward education reform with vouchers, charter schools and expanded programs.

Local legislation and collaboration between public schools and private options also allows Indianapolis and the entire state to be a leader in school choice. But there’s still room to grow, and many panel members mentioned once education reform advocates can remove poverty from a student’s life, their education performance will dramatically improve.

“What we have not yet done is have a systematic approach to attacking the poverty issues,” Carpe Diem founder Rick Ogston said. “They come to a great school and return to an impoverished environment.”

Jason Kloth, Deputy Mayor of Education, said Indianapolis students face various levels of poverty, and his office is trying to attack it by initiating a preschool program for all students.

So far, Kloth says, politics is getting in the way of a launch of the program with Republican support and little movement from Democrats.