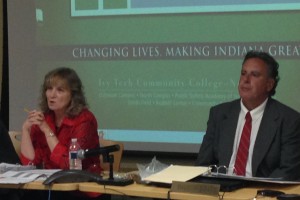 The State Board of Education voted 7-3 Wednesday in favor of Rules for Educator Preparation and Accountability (REPA III), a controversial set of teacher licensure requirements.

Since 2010, teachers, principals, and university educators have protested the different versions of REPA, saying it puts inexperienced teachers into classrooms and undermines a traditional education degree with pedagogy training.

Most of those opposing REPA III asked that the “career specialist” license be removed. This license, formerly known as the adjunct permit, would allow anyone with a bachelor’s degree to teach in a related field if they pass a content test and begin a program to improve their teaching skills within the first month of teaching.

Almost a dozen people spoke during the public comment period, including Ball State’s Dean of Teachers John Jacobson, who asked that the career specialist license be removed from the language. Jacobson shared his experience as an educator in Texas when its state board of education passed similar licensure rules, and said it brought inexperienced individuals into the classroom who didn’t stick around long.

Board members Brad Oliver, Troy Albert and superintendent Glenda Ritz voted to delete the career specialist license but were defeated.

Board member David Freitas was one of the seven who voted in favor of REPA III, and said this license wouldn’t guarantee a job to someone who receives it.

“I want to empower local schools to make that decision…who they want as a teacher,” Freitas said.

But board member Brad Oliver, who filed the motion to delete the license, said there is no way to compare the teacher to others with traditional licenses to monitor how the program works.