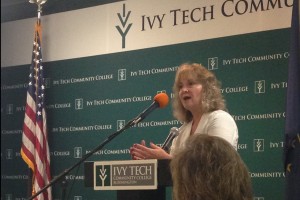 State superintendent Glenda Ritz says Indiana will apply for a federal grant that would help establish infrastructure to create high quality preschool for all children throughout the state. Ritz spoke about the grant opportunity Tuesday during her opening remarks at the Indiana Department of Education sponsored Early Learning Summit, which gathered early educators and IDOE staff to look at the major issues facing those who teach children from birth to third grade.

Last week, the U.S. Department of Education announced the grant Ritz is talking about, which would provide $250 million to selected states. In a statement released last week, the USED describes how this grant is for states like Indiana with no universal preschool infrastructure in place:

The goal of Preschool Development Grants is to support states – including the District of Columbia and Puerto Rico – in building, developing and expanding voluntary, high-quality preschool programs in high-need communities for children from low- and moderate-income families. The new grant program will be jointly administered by the U.S. Departments of Education and Health and Human Services.

“We don’t really have a system in place in Indiana that guarantees children quality pre-schooling,” Ritz said. She says the Paths to Quality ranking system is a step in the right direction, but since it’s a voluntary program it doesn’t help all children.

The infrastructure Ritz would like to see if awarded the grant money would be a stronger relationship between the IDOE and the health department, Family and Social Services Administration, and other state agencies that play a role in early education. Ritz also said a successful infrastructure would include a Kindergarten assessment, stronger partnerships with Health department and family services, as well as getting every preschool in the state to a high quality level.

The state recently announced the five counties selected to participate in its pre-school pilot program, which the General Assembly passed this year. The pilot program will provide voucher for low income children to attend high-quality preschools. The state will complete a longitudinal study looking at the affect of the program on the child’s education.

Applications are due Oct. 14 and the USED says the grants will be awarded by December.