As we mentioned yesterday, a new charter school will open in Dugger later this month, thanks to a partnership with the Indiana Cyber Charter School. And after a school board meeting last night, the new charter school has a home in two of the school district’s old school buildings.

The Northeast School Corporation School Board voted 5-0 for the sale of the former Union High School and Dugger Elementary properties at a meeting Monday night. 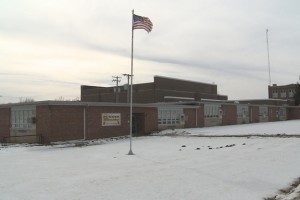 A new charter school in Dugger will now occupy the former Dugger Elementary school building, as well as the Union Junior/Senior High School.

This is the same board that voted last December to close the Dugger Union Community Schools because of budget shortfalls.

The entire process began in February of this year, when the NESC school board signed a resolution to put both schoolhouses on the Indiana Department of Education’s vacant school building list. Board members finalized registration to that list on July 31, and the very next day Dugger Union Community School reps penned letters of interest in both buildings.

It’s been a long process, according to NESC Superintendent Mark Baker.

“The Dugger community has been a part of the Northeast School Corporation family for a long time, so it was kind of a bittersweet moment,” Baker says. “It was sad that they were leaving, but it was inevitable that that was going to happen a month ago once they kind of got their charter up and going. On the other hand, it was, ‘here are the keys, good luck, hope to be working in the future.’

As far as the future is concerned, Baker says NESC has not planned any collaboration with the new Dugger school yet, but some joint programming is a possibility.

Although the district has another high school, it is more than 20 minutes outside of Dugger – which prompted community members to seek a new school for their area after the closure decision. They didn’t have much success initially, with the Indiana Charter School Board denying the community a charter in May.

School officials only recently confirmed the partnership with Indiana Cyber, at an enrollment roundup at the end of July.

Indiana Cyber – headquartered in Schererville – provides online-only course curriculum and education plans for K-12 students throughout the state. It is considered a public school, operating under a charter from Education One, the charter school authorizing body of Trine University.

The school in Dugger will blend online instruction with the traditional classroom setting – hence the need for a physical building.

Between 275 and 300 students have already enrolled for next year, according to Indiana Cyber CEO Don Williams. Community members will spend the next few weeks cleaning up the old buildings before classes begin August 25.