Over the past decade, an increasing percentage of teachers have either moved to another school or left the profession altogether. 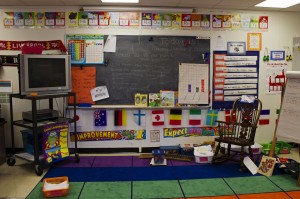 An increasing number of teachers is leaving the workforce each year.

A new report from the Alliance for Excellent Education shows that roughly half a million U.S. teachers move or leave the profession each year. That’s a turnover rate of about 20 percent compared to 9 percent in 2009.

State-by-state analysis found that 7 percent of Indiana’s teachers left between 2008-09.

That rate of attrition is relatively high compared to some other careers, according to a similar study released by the Consortium for Policy Research in Education. Teachers had significantly less turnover than secretaries, child care workers or correctional officers. On the other hand, teachers leave their jobs at about the same rate as police officers and considerably more often than nurses, lawyers and engineers.

And it’s costing school districts, large and small. Thousands of dollars walk out the door each time a teacher leaves because schools have to pay for recruiting, the hiring process, and training new teachers.

Attrition costs the United States up to $2.2 billion annually. Those teachers that left Indiana? Its estimated their departures cost the state between $20 million and $45 million.

Why do they leave?

The reasons vary. Some are terminated, others simply retire. Some leave for better pay or for family reasons. Just over 34 percent say they left to pursue another job. The most common reason: dissatisfaction with working conditions. Close to half of former teachers surveyed by CPRE give this as their reason for leaving.

“The primary driver of the exodus of early-career teachers is a lack of administrative and professional support,” said Susan Headden of the Carnegie Foundation for the Advancement of Teaching in a recent report. “Quite simply, teachers don’t think the people they work for care about them or their efforts to improve.”

Longstanding concerns remain about students’ access to effective teaching as states gear up to implement rigorous college and career ready standards. Indiana is one of those states, preparing to introduce a new set of its own standards this fall, and a coordinating assessment next school year.

“If the dominant teacher workforce policies and practices remain unchanged, then the aspirations of rigorous state standards will simply continue a legacy of unfulfilled reforms,” the Alliance report states.

Experts seem to agree that better support, feedback and training can help curb the attrition problem, especially among those just entering the teaching workforce.

Richard Ingersoll, professor of education at the University of Pennsylvania, says methods of recruitment and retention are equally important in keeping the teaching force afloat. He’s studied a wide variety of supports provided to teachers – everything from face-time with administration, to mentors, seminars for incoming hires, and structured time for collaboration between colleagues.

He says the majority of studies show positive effects for these types of programs – but it depends what type, and how much support you get.

And as the transition to Indiana’s new standards and assessment takes place, Ingersoll says guidance can help lessen the stress on teachers and keep them in our schools.

“If you have the bar and you ask the teachers and the schools to meet it, and then give them the tools to do the job, you will not drive them out,” Ingersoll says. “If you give teachers the tools to meet the standards, then the retention is much better.”

Ingersoll says giving teachers discretion over their own classrooms will also be key in a successful rollout.