Mattie Grimes dropped out of high school. She’s now 31-years-old and a single mom, but she hasn’t lost sight of her career aspirations. 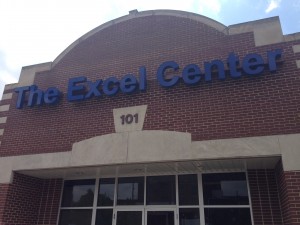 “I want to work in a factory,” Grimes says. “I don’t like working fast food.”

She’s also realistic about her goal.

“Factories will not hire you unless you have a high school diploma,” says Grimes. “So if that’s something that I want to do, I gotta have what I gotta have.”

Two-thirds of employers say a diploma is the least people like Grimes need to have, according to a recent survey by the Indiana Chamber of Commerce. Nearly 40 percent of employers say they have left jobs unfilled because they could not find qualified applicants.

Many adults choose to expedite their move into the workforce by taking the General Educational Development, or GED test. But some experts argue earning a high school diploma might better prepare students for the challenges of college and the workforce.

So, some students, like Grimes, are going back to school.

The Excel Center in Kokomo offers adults a chance to earn a Core 40 high school diploma. The tuition-free charter school is open to any Indiana resident older than 18–students who have a GED can still enroll.

“We’re taking individuals who may have been collecting public benefit prior to attending here, and putting them in a position where they can become a taxpaying citizen,” says Nick Parks, the Excel Center’s director.

The center is structured like a traditional high school, but with a few twists. Licensed teachers provide instruction Monday through Thursday, during both daytime and evening sessions. Fridays are set aside for students to come in for additional help, if needed.

Since students often need to balance school with other family and work responsibilities, the school also attempts to make accommodations such as providing drop-in child care and free transportation assistance, to address those needs.

The program varies in length, depending on how many credits a student has upon entering. All students complete either a career certification or a dual credit course before graduation.

In addition, each student is assigned a life coach whose goal is to help address any issues, academic or extracurricular, and lead the student toward a diploma.

“The issue we have to work with is not just their academics, but we also have to work with the issues that caused them to drop out in the first place,” says Scott Bess, Senior Vice President of Goodwill Education Initiatives.

Goodwill Education Initiatives, a not-for-profit arm of Goodwill Industries of Central Indiana, has operated other Excel Center locations around the state since 2010.

As far as curriculum, teachers present the same material as in any other high school – algebra, geometry, English.

Todd Strong, a former public school teacher who now serves as Kokomo Excel’s lead instructor, teaches “financial foundations.” He says his classes function much like the economics courses he used to lead for 16-year-olds, with one major difference.

“I can say the word ‘mortgage’ and they’re going to be familiar with it,” Strong says. “They’ve either experienced hardships from it, [or] they know what it means to be comfortable. They understand what finances mean to life, so students really want to learn about it.”

Kokomo was Excel’s sixth center, and it wasn’t selected by chance. More than 11,000 adults within a 10-mile radius of the center don’t have a diploma. The median income in Kokomo falls well below the state average.

Last summer, the school recruited and enrolled 318 students. After year one, 10 of those students now have their diplomas.

Mattie Grimes is set to graduate in October.

Strong calls that a success. Looking ahead to next year he says his school is in a good position. They’ll evaluate what worked and did not work this year and they’ll look at the lessons learned at other Excel Centers.

“We will become more efficient as we sort of expand on that and just continue to build on the things that we have going well,” Strong says. “We have to convince people that what we do here is worth people’s support.”