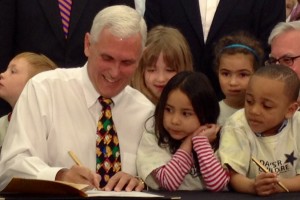 The following counties were selected as finalists and have until June 30 to submit proposals to be one of the five final counties selected:

Melanie Brizzi, Child Care Administrator at the FSSA, says the legislation that created the pilot program required the 18 counties be dispersed throughout the state and have a mix of urban and rural cities within the county.

Brizzi says the proposal to be chosen for one of the five final counties gives the FSSA more information that just data and statistics.

“Tell us about your past commitment to early education, tell us what else is going on in your county, tell us what your plan is for participating in fundraising activities or parental engagement,” Brizzi said.

Board member Tony Walker represents Lake County, which includes Gary, and says he is ecstatic this community was chosen as a semi-finalist.

“We have too many kids coming into Kindergarten that do no read, many of them don’t know their ABCs yet,” Walker said. “I’ve heard from superintendents in my district that they spend up to third grade just trying to catch kids up to grade level.”

The selected counties have an estimated 17,000 eligible four-year-olds currently not enrolled in a pre-k program.