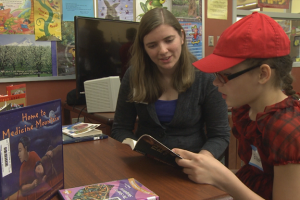 Elizabeth Huffman reads with her tutor at Fairview Elementary in Bloomington.

The Monroe County Community School Corporation hopes it has found a new solution to low standardized test scores at Fairview Elementary in Bloomington.

The school is partnering with an Indiana University student group in hopes strong community ties can help struggling readers improve.

Fifth grader Elizabeth Huffman likes to read, but her mom Autumn Huffman says she could use some help with reading comprehension.

“I hope that she not necessarily has a newfound love of reading but is able to delve into it a little bit more as I saw her do today,” says Huffman.

Earlier Interventions Have Been Unpopular With Parents

For the past two years, fewer than half of Fairview’s students have passed the state’s ISTEP+ exam. These tutoring sessions are part of the school’s latest efforts to improve test scores. Earlier this year, school officials moved students to different classrooms based on academic ability.

That sparked an outcry — and after meeting with parents, the school reversed its decision. Principal Tammy Miller says the new reading program does a lot to include parents, who are asked to come in and learn how they can work with their child at home.

“I heard a presentation from the superintendent in Fort Wayne and she did mention that schools with very similar demographics to Fairview have used this same type of approach of bringing the community in and had great success,” says Miller.

Fort Wayne Community Schools has been pairing students with adults for tutoring for 25 years. After the school day ends, kids who need a little extra help are bused to different businesses and community centers to work with their tutor.

About 500 students participated last year — and three-quarters of them saw gains in reading, writing, math and social development.

The training tutors get today is very different than it was 25 years ago.

“We actually are talking about testing with our tutors,” says Community Programs Coordinator Sharon Callender. “We talk about they will be seeing examples of the types of problems that students will have to answer on ISTEP+ and they look different from when we were in school.”

Callender says the program gives the community a window into the school district it might not otherwise have.

“It has really made a huge different,” says Callendar. “Not only in the way that the students are performing much better, but also in the way the community is perceiving that school.”

And she says that’s important as districts across the state face increased scrutiny from the state and competition from charters and private schools. Asking the public to get involved increases the community’s stake in school turnaround efforts.

Goal Is Reading, Not Testing For Fairview Principal

Back in Bloomington, Principal Miller says the Fairview program probably started too late to make much of a difference in this year’s test scores. 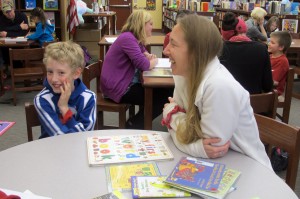 School officials at Fairview Elementary encourage parents to attend tutoring sessions with their children so they can learn strategies for reading at home.

But she says that’s not why the school is doing it.

“The real issue at the heart of this situation is these kids have to be able to read so they can graduate from high school and lead a productive life,” she says. “So regardless of when the test is scheduled, the real issue is how do we get them reading at grade level?”

If Fairview students really respond to the program, it will likely be continued in the fall — and possibly expanded to other schools.