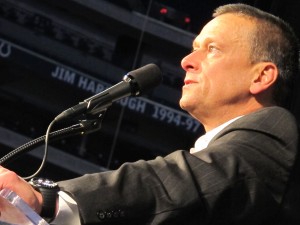 An ethics hearing for former state superintendent Tony Bennett has been pushed back from May to August, reports Tom LoBianco for the Associated Press:

Bennett is accused of using state resources, including staff and state computers, in his failed 2012 re-election bid. The inspector general filed the charges last November, shortly after The Associated Press reported Bennett had kept Republican Party fundraising lists on his state computers and top staff had been campaigning on state time.

Bennett issued a statement in November saying he had done nothing wrong and would cooperate with the investigation. He hired a pair of high-profile defense attorneys — Larry Mackey and Jason Barclay, with the Indianapolis firm Barnes and Thornburg.

Barclay said Monday that the defense team received 10 binders worth of documents from the inspector general’s office last month in response to their discovery request and is reviewing their contents.

“You can imagine when you’ve been in office for four years, there’s lots of email communications, calendar entries. I would describe it as documents that are typical in any state elected official’s office,” he said.

Bennett, a one-term superintendent, lost his reelection bid in 2012 to Democrat Glenda Ritz. He quickly secured a new job as schools chief in Florida, but resigned that post amid allegations of grade-tampering in Indiana. Bennett is now working as a consultant for ACT.

The Indiana Inspector General filed an ethics complaint against Bennett in November. But as we’ve written before, legal experts say charges of “ghost employment” are difficult to prove.

This is the second time Bennett’s hearing has been postponed.

One former state superintendent, Harold Negley, faced charges in the 1980s after directing his staff to work on his reelection campaign. He was fined $1,000 and sentenced to 200 hours of community service, according to the Indianapolis Star.