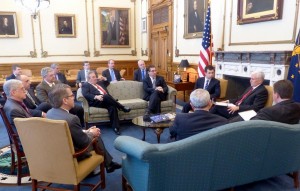 Gov. Mike Pence is “open” to using state dollars to replace the roughly $54 million* local governments and schools would lose if state lawmakers were to exempt small businesses from paying a property tax on their equipment, as an Indiana Senate bill proposes.

“This would ensure that any reform of this tax does not unduly burden local governments or shift the cost of this tax onto hardworking Hoosiers,” Pence said in a statement Tuesday.

The governor also touted the benefits of a separate Indiana House proposal that would give counties the option to stop taxing newly-purchased business equipment.

Pence, who opted against discussing details of the proposed business personal property tax cut last week, made that announcement after meeting with several Indiana mayors Tuesday afternoon. Officials in Indiana cities and towns have asked lawmakers to back down from their proposal; the tax rakes in $1 billion annually for their local governments and schools.

A total cut of the tax isn’t currently on the table in the General Assembly — but if it were, local schools would lose $170 million.

I believe that reform of the business personal property tax will mean jobs for Hoosiers.

After listening to local communities across our state, I have informed legislative leaders that I am open to full state replacement revenue for local governments to cover the cost of eliminating the business personal property tax on small businesses with less than $25,000 in equipment, as proposed in Senate Bill 1. This would ensure that any reform of this tax does not unduly burden local governments or shift the cost of this tax onto hardworking Hoosiers.

This reform, along with affording counties the option of ending the tax on new equipment as proposed in House Bill 1001, would make our communities and our state more attractive for the kind of investment that will create jobs for Hoosiers. In the end, Hoosiers and our local communities will benefit as business grow and companies bring new jobs to our state.

I look forward to working together with House and Senate leaders, as well as local officials, as we continue to advance these important reforms.

* CORRECTION, Feb. 11, 8:50 p.m. Eastern: An earlier version of this story incorrectly referred to $30 million in replacement revenue. $54 million is the correct amount of money the state would have to spend to replace lost local revenues.