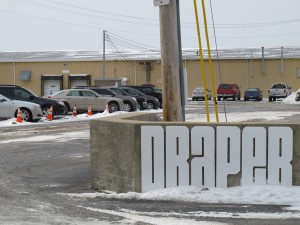 The Draper, Inc., plant in Spiceland might have been the birthplace of your school’s gymnasium.

The manufacturer actually makes all kinds of equipment for schools, from window shades to projection systems. Look one way and you’ll see a basketball hoop hanging from the ceiling. Look another direction, and you’ll see wall padding stacked on a pallet.

“I’ll sell a lot of these to Saudi Arabia,” says Nate LaMar, who manages international sales.

Any equipment Draper employees use to make these products in its 400,000 square foot plant in Spiceland — from staple guns to forklifts — is subject to Indiana’s business personal property tax. It’s not just manufacturing equipment; office supplies and computers are taxed too.

LaMar says he sees both sides of state lawmakers’ current debate over whether to cut that tax, which generates $1 billion in revenues for local governments. In addition to his work at Draper, LaMar is also president of the Henry County Council. If lawmakers totally eliminated the tax, the county’s budget takes a $391,000 hit.

Though neither of the bills General Assembly members approved last week amount to a total elimination of the business personal property tax, school districts still stand to lose more than $170 million from funds already bruised by the state’s property tax caps.

LaMar says the state legislature needs to give local governments the ability to raise more local taxes. But LaMar ultimately sides with the business interests who’ve come out in favor of scaling back the tax. Illinois, Michigan and Ohio have all scaled back their business equipment taxes, and LaMar says he worries about Indiana’s reputation among companies looking to move.

“I don’t want us to be regarded as the branch plant state that we currently are,” he says, saying the state should be angling for corporations big and small to completely relocate here.

“It’s much more difficult [to cut employee jobs or close manufacturing facilities] if you and your corporate headquarters are located in Indiana with your plants, where things are manufactured,” LaMar tells StateImpact. “Your corporate managers have put down roots here, and therefore have a vested interest in the community and its betterment.”

Members of both chambers of the General Assembly have floated plans to cut the business personal property tax, but the Indiana House’s bill differs from the Indiana Senate’s proposal.

The current House plan would give counties the option to eliminate the tax on new business equipment purchases, creating a natural “phase-in” period. By contrast, the Senate plan would lower corporate income taxes and exempt any business with less than $25,000 in personal property from paying the equipment tax.

Representatives for the Indiana Chamber of Commerce and Gov. Mike Pence have both said the tax cut should come with a replacement revenue source.

“I have committed to [phasing out the tax] in a way that does not unduly burden local governments’ ability to provide for the needs of their citizens,” Gov. Mike Pence wrote last week in a letter to local government officials.

But without a clear plan to replace business personal property tax revenue, school districts have been left with numbers illustrating what would be for them a worst-case scenario — a total elimination of the tax.

“When they make major changes, I mean, that’s fine — but are they going to make up any of this money? That’s not really been addressed,” says Chris Stitzle, superintendent of the Southwest School Corporation in Sullivan.

A total elimination of the tax would double property tax losses in 130 of the state’s corporation, including Stitzle’s district.

“That’s going to, potentially, strap us,” he says. “We pay a good portion of our utilities out of capital projects, which we’re allowed to do by law. We may not be able to do that anymore.”

Property taxes make up roughly one-third of most schools’ budgets and generally foot costs of transporting students to school, replacing buses, repairing buildings and paying down a district’s debt.

Who Pays The Tax & How Do They Pay It?

Among the reasons Bill Waltz of the Indiana Chamber of Commerce believes the tax should go:  small businesses.

Many likely don’t own much equipment — and therefore wouldn’t owe a significant amount of money — but still have to account for every piece of machinery or office furniture when they file their taxes.

“Every bit of that has to be set out on the return or you pay an accountant to do it,” Waltz says. “It doesn’t take too long to generate a $700 accountant bill. Anybody that’s paying $700 to pay $700 [in total taxes] doesn’t make sense to me.”

Most business personal property tax revenue, though, comes from the largest businesses with heavy equipment.

If you ranked the 287,000 business personal property taxpayers by the amount of taxes paid, Purdue economist Larry DeBoer says the top 100 payers would account for more than one-third of the tax payments. The bottom 100,000, he says, account for 1 percent of the payments.

But Waltz says the Chamber of Commerce does not advocate for a clean tax break for businesses.

“This is a classic example in restructuring where it makes sense to get rid of one tax and replace it with another one that’s not as detrimental to the economy,” he says.

Henry County Council President Nate LaMar says one way to make up that revenue might be by giving local governments more flexibility to raise taxes on food and beverage purchases or hotel stays.

He says when Henry County wanted to extend a food and beverage tax, they needed state lawmakers’ help.

“We had to go through our state senator and our state representative to make it happen… It’s a very inefficient process,” LaMar says.

He says the business personal property tax debate might be an opportunity to afford local governments more control over their ability to raise taxes besides their property or income taxes.