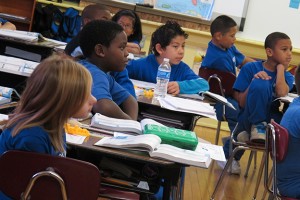 A proposal to let voucher-accepting private schools opt out of the state’s ISTEP+ test fizzled in committee Wednesday.

After members of his own party objected, the bill’s author offered an amendment to require voucher-accepting private schools continue taking Indiana’s standardized test, writes Eric Weddle for the Indianapolis Star:

Sen. Scott Schneider, R-Indianapolis, attempted to convince members of the Senate Education Committee that loosening rules for these schools would truly give parents an option in deciding where to enroll their children and use vouchers to help pay for tuition.

The bill was written to let schools eligible for the Choice Scholarship program decide whether to administer the ISTEP exam to assess student learning. Instead, these schools could use another standardized test approved by the State Board of Education.

“To me the essence of choice is that money follows the child to the institution of the parents choice,” Schneider said. “And that really is the true essence of choice. And if we are going to have a voucher program, we need to maintain some sort of autonomy for these schools.”

That reasoning didn’t sit well with committee members, some of whom said schools receiving tax dollars need to be held accountable in ways similar to public schools — including administering the ISTEP.

Even after Schneider’s amendment, the bill still contains a provision that releases private schools from some of the data-reporting requirements of the voucher program.

As we wrote yesterday, one of Schneider’s other education proposals, a plan to force Indiana’s exit from the Common Core initiative, also passed out of committee.