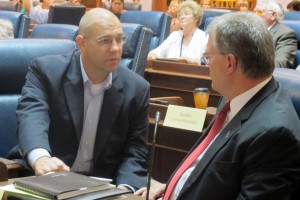 A panel of state lawmakers will today hear a bill that would require Indiana to exit the Common Core initiative and write its own expectations for students.

The state adopted the nationally-crafted academic standards in 2010, but the General Assembly suspended roll out last year amid concerns it would mean the end of local control in Indiana schools.

But the way the bill is written now could spell trouble for Indiana education officials. From Chalkbeat’s Scott Elliott:

The state board and state Superintendent Glenda Ritz have responded by embarking on a process to set new standards. Ritz said earlier this month she did not expect Common Core standards to emerge from the process as the state’s sole standards, but instead new standards may incorporate Common Core elements along with locally-created standards.

Ritz has said the standards will be ready for the board to vote on them by the July deadline.

Daniel Altman, Ritz’s spokesman, said Senate Bill 91 could violate Indiana’s agreement with the federal government. That deal requires the state to adopt “college and career ready” standards in order to be released from the accountability requirements of the federal No Child Left Behind law. If the state were subject to the those sanctions, a significant number of schools that did not meet NCLB’s goals for test score gains could be forced to take dramatic actions, like replacing the principal and replacing teachers.

“As this bill is written right now, we think it will put the waiver in pretty significant jeopardy,” Altman said. “The U.S. Department of Education is watching very carefully right now what is happening in the Indiana legislature.”

We’ve written before that keeping the waiver in place hinges on Indiana maintaining college- and career-ready standards in place.

If the state leaves the Common Core, that would require Indiana’s institutes of higher learning to certify that whatever standards the state adopts next would prepare students for college-level coursework.

Elliott reports the bill’s author, Sen. Scott Schneider, R-Indianapolis, says he’s willing to work with the education department to modify the bill so as not to risk the waiver.