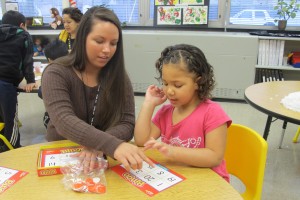 An aide helps a student count at Busy Bees Academy, a public preschool in Columbus.

As part of a legislative proposal to create a state-funded preschool program, Indiana would also have to pick a test for assessing kindergarten readiness.

Preschoolers don’t sit down to take a standardized test the way older students do. The state’s assessment, called the ISTAR-KR, is based on the observations of early childhood educators.

Holliday oversees the district’s preschool classrooms, including those at Busy Bees Academy. Last year every English-speaking student who went through the program reached the state’s benchmark for kindergarten readiness on the ISTAR-KR.

During activity time at Busy Bees in Columbus, 4-year-olds Ares and Kaleb grab fat paintbrushes and smear white paint on black construction paper. Holliday crouches next to their table. 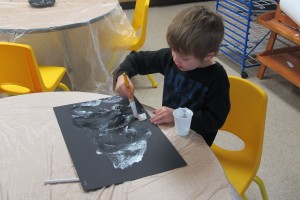 A student paints an art project at Busy Bees Academy, a public preschool in Columbus.

“What are you doing?” she asks.

“Painting,” says Ares, picking up his painting and taking it to the next table, where eyedroppers sit in pools of paint.

“It’s a two-step process,” Holliday explains. “You get to do the puffy paint over here, then you get to add the color over there.”

Ares and Kaleb are just having fun. But Holliday and their classroom teacher are watching closely for developmental milestones that indicate kindergarten readiness.

That’s the kind of observation teachers will later note on the ISTAR-KR. At Busy Bees, students are screened before they ever enter preschool. Then they’re assessed three times — in the fall, winter and spring — before heading off to kindergarten. Those mid-year assessments are happening now.

“It’s so much fun to see the children grow and learn, watching the independence and the confidence grow from the beginning of the year when they walk in the door to now,” says Holliday. “To think that we still have these kids five more months? I can’t wait to see where we are at the end of the year.”

Why Most Head Starts Don’t Use State’s Assessment

Bowles pulls up the website Hoosier Uplands uses to organize all that data. On screen, color bands keep track of what’s age-appropriate for 3-, 4- and 5-year-olds.

“So if we have a child who is working on social and emotional skills, making friends is something we want them to be able to do,” says Bowles. “We can document, ‘Today so-and-so went and played in a group with three other children and the continued to play after five minutes.'”

Hoosier Uplands uses the ISTAR-KR for its Early Head Start program. But the center pays for a different assessment, called Teaching Strategies Gold, to track its 4- and 5-year-olds. That’s because Head Start has been tracking kindergarten readiness for years, before the state created its free assessment. Switching to the ISTAR-KR would be difficult because the ISTAR-KR is not aligned to Hoosier Uplands’ curriculum.

“Where we might show the kids are meeting and exceeding, they might not show that based on their assessment,” says Bowles. “So it’s kind of hard — it’s like comparing apples to oranges.”

What Indiana Can Do To Improve Kindergarten Readiness

One of Head Start’s goals is to send kids to kindergarten with detailed reports on the progress they made in pre-K.

An early learning survey the department conducted last year found only 2 percent of Indiana students reach kindergarten with any kind of documentation of what they learned in preschool.

“It’s just not happening,” Indiana Department of Education Early Learning Director Charlie Geier. Helping the state’s preschool programs streamline what transition looks like is one of the department’s key early learning goals. “Because right now it’s different for every single student and every single program.”

But increasing that percentage will be difficult because only about half of Indiana’s 5,000 public and private childcare providers participate in the state’s Paths to Quality rating system.

Still, Geier wants to see the state work to improve the ISTAR-KR and expand its reach — work he says can be done even if lawmakers don’t approve a pre-K pilot this session.

“Eventually, hopefully, we’re going to have more advancements and more funding and it’s going to expand,” he says. “The way it’s organized right now, there are some holes and gaps that need to be filled so when we do get the funding, we can do it in the right way.”