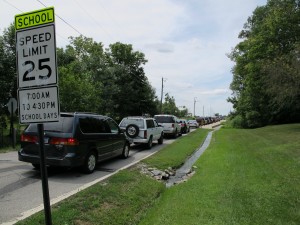 Cars were moving at speeds well below the school zone limit near Franklin Township Middle School East in August 2011, after steep busing fees impelled many parents to drive their kids to school. School officials began charging the fee after property tax caps cut off revenue from the district's transportation fund.

A bad riddle for you: what do the costs of owning a home have in common with school buses, technology upgrades, small-town schools, school closures, referendums and special elections?

Though voters enshrined the limits on property tax collections in the state’s constitution in 2010, we at StateImpact hear a lot about them — they kept $245 million in revenues out of schools’ budgets and in property owners’ pockets last year.

With property taxes back in the spotlight and their impact on district budgets growing, we thought we’d put together a few more excerpts of our interview with Purdue agricultural economist Larry DeBoer that will — we hope — help you make sense of the issue. (Check out his explanation of the state’s business personal property tax.)

Alright, let’s start at the beginning. What is a ‘property tax cap’?

It’s a limit on the amount of taxes local governments can collect on a piece of property.

Sounds simple enough. How does it work?

That depends on what kind of property we’re talking about. Do you own a home? A business? Rental property? Farmland?

For instance, let’s say the assessor says your home is worth $200,000. The state’s constitution prevents you from paying more than $2,000 in property taxes on that home in a year. That’s no random limit. Under property tax caps, governments cannot collect more than one percent of the “gross assessed value” of a piece of homestead property.

Owners of farmland or rental property won’t pay any more than two percent of the property’s value in taxes. For any other type of property — notably, commercial property — gets capped at three percent.

The caps “emerged from ten years of property tax chaos,” says DeBoer, “that began at the end of 1998 when our Indiana Supreme Court determined that the way we were assessing property was unconstitutional.”

Long story short, DeBoer says property owners started seeing wild swings in their property tax bills. Some years, a property owner’s tax bill would be low. Some years, they’d be very high. By 2007, DeBoer says, the General Assembly was spending more than $2 billion of the state budget on helping ease the burden of property taxes. The worst part, says DeBoer was that homeowners couldn’t plan ahead for the swings.

“Everybody realizes that the Indiana homeowner property taxes are not very high compared to most other places — Illinois’ are much higher,” says DeBoer. “But it was the uncertainty of the thing.

So this is where the property tax caps come into the picture, right?

Yup — and state lawmakers paired the caps with an increase in sales taxes.

“You may remember we raised the sales tax in [2008] to replace some of the lost property tax revenue and then imposed these caps as well to say, ‘Yes, your property taxes may vary, they may grow, but there is a cap,’” DeBoer says.

Okay, so the caps are in place to keep my property tax bill from going through the roof — as a homeowner, I like that. But you said $245 million in revenues diverted from schools? What would districts have used that money for?

In general, for a few key things: maintaining buildings, building new buildings, paying off the debt from (mostly) buildings. So, buildings. But also for replacing buses and keeping them on the roads. Some districts use property tax dollars to pay for new technology.

(As part of lawmakers’ 2008 overhaul of Indiana’s tax policy, though, state government assumed responsibility for the General Fund — which, on average, accounts for two-thirds of the dollars on a school district’s ledger. Instead of local property tax dollars, state sales tax dollars now replenish that fund. Districts use this money to pay operating costs, like salaries and benefits for teachers and staff.)

Anyway, yes, the tax caps have diverted $245 million from the funds schools use to pay for buses, buildings and debt. Only Indiana’s city governments have seen as big of a collective hit to their budgets — about $244 million — from the tax caps.

Which districts have been the biggest losers from the caps?

Most districts haven’t lost that much. More than two-thirds of the state’s districts lost less than five percent of their property tax revenues last year.

If there’s a common thread among these hardest-hit districts, it’s this: most of them are in areas with incorporated cities or towns. Basically, property taxpayers in these communities are paying for another layer of government services. Since property tax caps shrink the overall pie of available revenues, DeBoer says school districts are left with a smaller share.

Can school districts do anything about these losses besides cut?

This might be a good time to point out that part of the point of property tax caps was to check school districts’ ability to set tax rates at levels that were good for them. Before state lawmakers implemented tax caps in 2008, school boards could essentially name their tax rate, DeBoer says, so long as they met some state guidelines.

The key question, DeBoer says, was “will your taxpayers accept [the tax rate]? Will they vote the school board out of office? Will they force the firing of the superintendent if the property tax goes up? And if not, you can fill in those holes and keep your school corporation going. With the caps, that option is limited.”

That said, districts do have options to avoid deep cuts. Chief among them: ask voters to raise their own property taxes. Property taxes collected from taxpayer-approved referenda are not subject to the tax caps. In the state’s brief history with school referenda, schools have had mixed success at the ballot box, but there is some evidence that districts are getting better at asking for money.

“Since 2008, there have been six really small school corporations that have done referenda — school corporations with less than 1,000 students,” DeBoer says. “Five of them have passed, mostly by landslide margins, which tells me that small communities that think their school system might cease to exist if they don’t get the money are sometimes willing to pony up; willing to say, ‘Okay, we’re going to pay, we’re going to pay higher property taxes. We volunteer to pay higher property taxes in order to maintain our school corporation.’”