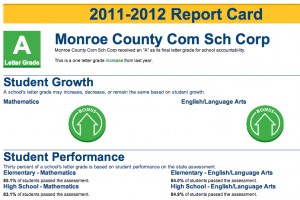 The State Board of Education approved 2012-13 district letter grades Wednesday.

Nearly two-thirds of Indiana school corporations received the same letter grade ranking in 2013 as they did in 2012.

State Board of Education members approved the grades at this morning’s brief business meeting. The number of districts receiving A’s remained virtually unchanged from last year, though more school corporations received B’s in 2013 than 2012.

“This is another indicator of the quality of education in Indiana,” said board member David Freitas during Wednesday’s meeting. “It’s moving in the right direction.”

Only board member Andrea Neal voted against approving the grades.

The grades rate a district’s overall performance but do not carry penalties under the state’s accountability system the way individual school letter grades do. Those rankings were released last month.

No school district improved or fell more than two letter grades. All five corporations that slipped two rankings went from A’s to C’s. There were 13 districts that improved two letters — most of those saw their grades jump from C’s to A’s.

You can find your school district’s 2013 letter grade here.

Here’s how the grades broke down:

State officials had hoped to present district-level grades for State Board approval during the December meeting, but told board members Wednesday they did not have the opportunity to have their work double-checked checked.

Board member Dan Elsener asked the Department of Education to perform analysis to figure out how teachers or district administrators could change their practice to improve their corporation’s grade.