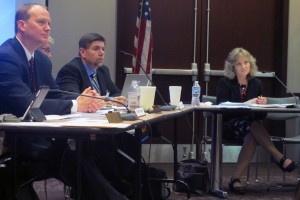 Gordon Hendry, left, Brad Oliver and state superintendent Glenda Ritz listen to a presentation at the November State Board of Education meeting.

Inclement weather pushed this month’s State Board of Education meeting back to Jan. 15 — the panel will hold a short business meeting before an already-scheduled strategic planning session.

But in abbreviating the agenda, the board has decided to put a discussion of the ongoing Common Core review on hold.

“The selected agenda items [for the Jan. 15 business meeting] are those which the board and superintendent thought they could address succinctly,” writes Center for Education and Career Innovation spokeswoman Lou Ann Baker in an email to StateImpact. “The standards discussion will certainly be more robust, and thus was carried over to the February meeting to allow for more appropriate vetting.”

Baker says the board couldn’t allot more time for the business meeting because they had already planned to meet with a paid consulting firm.

However, she says the delay shouldn’t impact the standards review process because State Board staff will be working with the Department of Education in the run-up to the February meeting.

Here’s what’s happening: In the fall, the Department of Education brought in classroom teachers to review the nationally-crafted Common Core State Standards, which Indiana teachers are already using in their classrooms. Last month, the State Board approved a resolution brought by board member Brad Oliver that would bring in subject level experts to measure the rigor of both Indiana’s old standards and the Common Core standards.

“One of the things I’ve obviously advocated for through the resolution was the need to get subject matter experts defined as folks that hold doctorates, earned doctorates in the disciplines of math and English involved in the evaluation of the standards and even to some extent the decision making around what constitutes college- and career-ready standards,” says Oliver.

The resolution also prompted a review of the state’s previous expectations, the 2008 English language arts and 2009 mathematics standards. Before, the review focused exclusively on the Common Core.

Oliver says it’s too soon to tell whether the academic standards that will be up for public comment later this year will be based on the Common Core or earlier Indiana standards. He does think the State Board can hit its July 1 deadline.

“I think there’s a reasonable amount of time to get the work done,” says Oliver. “I think the timeline that was articulated at the last board meeting is right and would have us basically going to public comment or public hearing sometime in late February.”