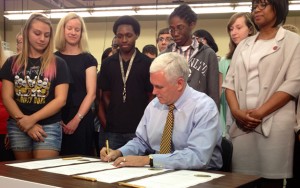 Gov. Mike Pence signs an executive order to create a new education agency focused on workforce development. The Center for the Education and Career Innovation has often been at odds with state superintendent Glenda Ritz and her department.

Around this time last year, we gazed into the StateImpact crystal ball and told you which education stories you should keep an eye on in 2013.

And we think we did a pretty good job of predicting this year’s big stories: Glenda Ritz, Tony Bennett and Common Core, to name a few.

But there were other stories we didn’t see coming, such as the computer glitches that ground ISTEP+ testing to a halt in the spring.

And controversial teacher licensure rules known as REPA II didn’t end up going anywhere after all.

Next week we’ll look ahead at the education stories to watch next year. But first, let’s take a look back at the seven stories we told you to watch as 2012 drew to a close and tell you how they made headlines — if at all — in the past year.