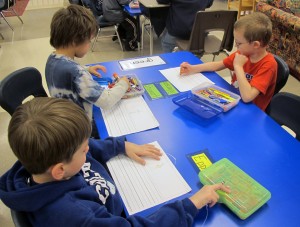 Kindergarteners at East Side Elementary in Brazil practice their writing skills.

All eyes were on Indiana when state lawmakers voted this spring to pause rollout of the Common Core — and posts about the new, nationally-crafted academic standards were some of our most popular in 2013.

Readers also wanted news about former schools chief Tony Bennett changing school grades and stories about tensions between superintendent Glenda Ritz and the rest of the State Board of Education.

Rounding out the list were Rockville Elementary and Glenwood Leadership Academy, two schools struggling to improve their state accountability scores.

As we look back, we’re curious about what StateImpact coverage you found most valuable in 2012. Leave us a comment, connect with us on social media or send us an email letting us know what you think of this list — and how we can do better in the new year.