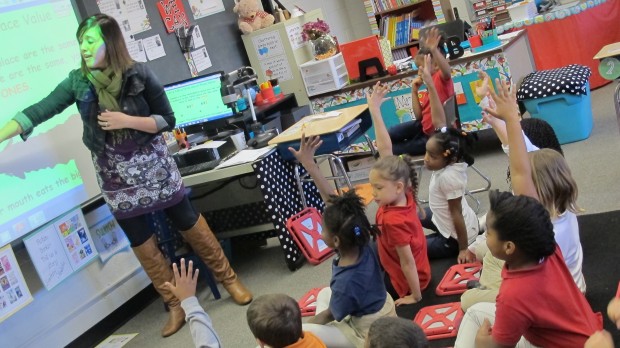 A teacher at Evansville's Glenwood Leadership Academy leads a lesson for her second graders. The school officially earned its sixth straight F on Friday and could face state intervention as a result.

The State Board of Education’s vote to make the grades official comes after months of political drama and fears of tainted test scores which threatened to delay the release of Indiana’s school letter grades into next calendar year.

Search for any traditional public, charter or private school’s 2013 letter grade on our sortable table of results.

Private schools still earned A’s at a higher rate than public schools — but that rate has slipped significantly. This year, 51 percent of private schools received the top grade, down more than 30 percentage points since 2011.

Indiana schools chief Glenda Ritz pointed out this would be the last time state officials would use the current grading formula to issue the grades. General Assembly members threw it out last session, ordering the State Board to come up with a new model next year.

“Though this current model for calculating school accountability grades will be changing, the data does show that some great learning is occurring in our schools, and I want to congratulate our students for their successes,” Ritz said in a written statement released ahead of the meeting.

“The new, more transparent and fair model,” she added, “will be fully operational for the 2014-15 school year.

Click to enlarge the image of these pie charts, which show the distribution of 2013 A-F letter grades. The leftmost chart includes both traditional public and charter schools.

Here are a few by-the-numbers takeaways:

The above chart shows the percentage of non-public and public schools, respectively, receiving A's in each grading year dating back to 2005.

Drawing from traditional public and charter school data, the above chart shows 49.5 percent of schools' grades remained the same in 2013 as they were in 2012.

Search for any traditional public, charter or private school’s 2013 letter grade on our sortable table of results.

State Board member Andrea Neal was the only member of the panel to vote against approving the grades, saying she didn’t feel the A-F model reflected the quality indicators parents and educators care about in Indiana schools.

“Although it appears complaints around the state are fewer in number this year, there are still schools questioning the transparency of the process,” Neal said.