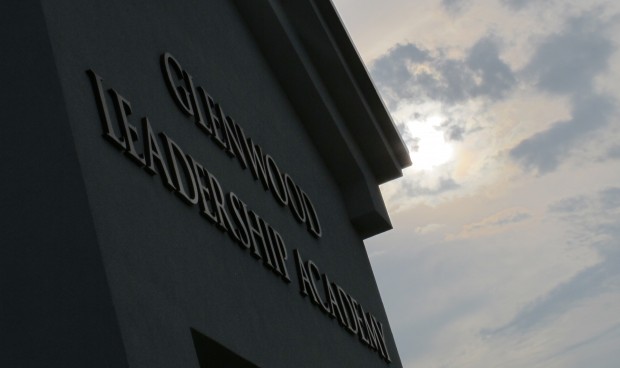 The main entrance of Glenwood Leadership Academy, a K-8 school in Evansville.

Nearly three-quarters of Glenwood students did not pass their ISTEP+ exams this year, requiring State Board of Education members to determine if and how they will intervene. They could hire an outside organization to step in to help improve the school — or take it over altogether.

Glenwood would be the sixth Indiana school state officials had taken over in the past three years — if state officials decide to go that route. When faced with the option to set up a “lead partnership” intervention at an Indianapolis high school last year, board members declined after district officials hired an outside school turnaround team.

But state superintendent Glenda Ritz, who has said she’s personally disinclined to launch a takeover, isn’t ruling out any of the board’s options.

Those options range, Ritz says, “from letting initiatives that are currently in place continue to happen if you’re seeing growth, to putting in additional, supplemental pieces to that, all the way to takeover.”

But Evansville Vanderburgh School Corporation leaders created a turnaround team within the district office and hired outside consultants. They let dozens of teachers transfer away from Glenwood and gave intensive training to those who stayed.

District superintendent David Smith says he’s optimistic his plan will work — not just for Glenwood, but for four other schools in the district.