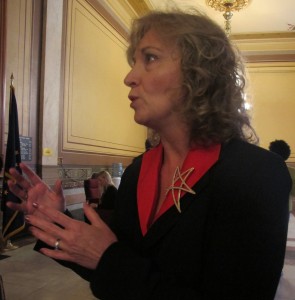 State Supt. Glenda Ritz takes questions from reporters after the July 19 State Board of Education meeting.

State Superintendent Glenda Ritz says emails from Governor Pence’s new education agency reveal an attempt to oust her as chairwoman of the State Board of Education. But Pence administration officials say that attempt is going nowhere.

Ritz’s office found the document in an email by an attorney for the Center for Education and Career Innovation, a new government agency created by Governor Mike Pence earlier this year.

The policy document floats the possibility of removing Ritz as head of the State Board. But the document also warns such a move “may have substantial political fallout,” and clarifying the chair’s role might serve the same end.

Ritz says she is committed to maintaining her role on the Board and preserving her authority to, in her words, “protect the voice of the voters” in the face of a plan to “take away authority statutorily given to the Department of Education.”

But the governor’s office says Pence has been very clear that he will not support an attempt to remove Ritz as chairwoman, a point they say Pence made in a private discussion with Ritz last week.

CECI spokesperson Lou Ann Baker says the governor has been unambiguous on the issue.

“We continue to waste time and resources on topics that are not central to serving the students, the boys and girls, the educators in Indiana,” says Baker. “And that’s the focus that all of the board members want to get to and I’m rather certain that that’s a major focus for the Superintendent as well.”

A Ritz spokesman says while the governor has been clear, State Board members’ continued words and actions indicate Pence’s message hasn’t gotten through.