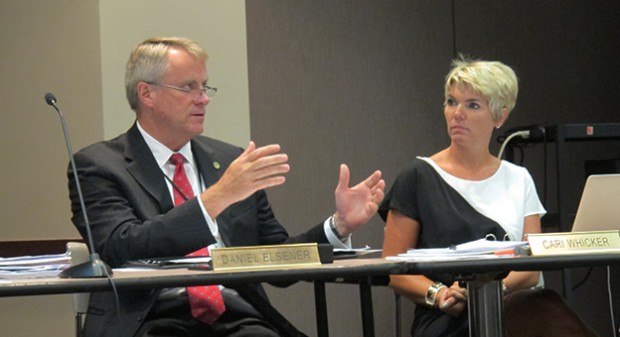 State Board of Education member Dan Elsener speaks during a meeting as fellow board member Cari Whicker looks on.

When a Marion County Circuit Court judge threw out state superintendent Glenda Ritz’s lawsuit against members of the education panel she chairs, he did so on procedural grounds — but left her primary complaint unaddressed.

Now, four private citizens are filing suit against the State Board of Education on the same grounds: that board members, in essence, met over email without her knowledge, violating Indiana’s public meeting laws.

As in Ritz’s suit, the plaintiffs’ claim centers on a letter State Board members sent to legislative leaders seeking their help in calculating A-F letter grades for schools. They say in authorizing the use of their signatures on the letter, the board members took “official action,” which under Indiana’s Open Door Law would have to take place in a public meeting.

An attorney for the Hoosier State Press Association explained to us in October that, in general, board members must generally meet face-to-face in order to run afoul of Indiana’s Open Door Law. There are exceptions — such as “serial meetings,” or meetings by phone — but the statute specifically says emails do not count as public meetings.

“If it was all done by email, it’s pretty cut and dry there was no violation of the letter of the law. Now, some people might argue it gets away from the spirit of the law,” said HSPA executive director Steve Key.

“Even through email, a perceived proactive ratification of an action concerning public interest is leaning against the public policy intentions of openness and transparency, but it cannot definitively be considered a violation of the Open Door Law as the legislature intended,” Public Access Counselor Luke Britt wrote in an advisory opinion.

But as a transparency advocate wrote in the Indianapolis Business Journal, some feel State Board members are still sidestepping the law, calling the email decision a “willful exclusion of the public from what is clearly public business.”

William Groth, the plaintiffs’ attorney, says the Public Access Counselor’s opinion is not binding in court.

“The Public Access Counselor is not a judge. He’s a political appointee of the governor,” Groth tells StateImpact. He added in a written statement:

If the [State Board’s] actions were to be found by a court [to] not violate the [Open Door Law], then the [Open Door Law] is apparently riddled with gaping loopholes and is badly in need of repair to restore its express purpose of keeping the public fully informed of official governmental actions. That said, we are confident that the ultimate decision in this suit will fully vindicate the public’s right to know.