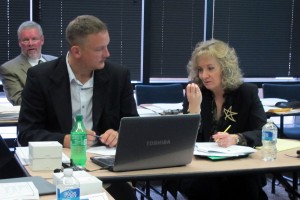 State superintendent Glenda Ritz says she thinks Indiana education officials can wrap up their review of the Common Core in time to have academic standards in place for next school year.

“Keep in mind we’re working from the standards we are currently teaching,” Ritz says. “So there will be revisions to those standards. The plan is for— the timeline is hopefully the State Board of Education will have final approval in April, and we’ll get out any revisions to the staff here in the spring.”

But some State Board members aren’t sure if that’s enough time to do their job property.

Right now most Indiana teachers are teaching the nationally-crafted Common Core standards the state adopted back in 2010. They’re also teaching what Ritz calls “Indiana academic indicators” — expectations for what students need to know and learn at each grade level to pass the statewide ISTEP+ test.

But legislation passed this spring has paused further rollout of the new standards — and delayed the adoption of a new test — until the State Board of Education has a chance to reaffirm support for the Common Core or adopt other college- and career-ready standards.

Board members have until July 1, 2014, to make a decision, but politically, they may not be able to keep the Common Core in Indiana.

That’s because House Speaker Brian Bosma has indicated state lawmakers are prepared to move away from Common Core this session.

“We need to strive to have the highest standards,” Bosma said at an Indiana Chamber of Commerce panel last month. “To solve the sideshow over Common Core, I think they need to be independent Indiana standards.”

Republican members of a panel tasked with reviewing the Common Core recommended the State Board build its own set of expectations for students.

If Indiana leaves the Common Core initiative, the state’s colleges and universities would have to sign off on the new expectations, certifying they would prepare students for higher education. Not only is it state law, but it’s required if Indiana wants to keep a federal waiver releasing it from strict accountability rules under No Child Left Behind.

Provided the State Board votes in April, Ritz says schools could have new standards in place for the 2014-15 academic year.

But she says it’s too early to tell how closely those standards will align to Common Core. She points out the State Board will be holding public hearings to gather input on the standards. That’s tentatively scheduled for early next year.

But State Board Secretary Dan Elsener isn’t as confident that work can be completed on the legislature’s time table.

“That’s another thing I wish we would be much more productive on,” Elsener tells StateImpact.

He says the last time the Board tried to discuss the Common Core review process — specifically, when Brad Oliver proposed involving schools of higher education sooner — Ritz left the room.

“Now we are behind. What we need, what the educators in the field need, what principals need and the superintendents and the parents need is really good leadership from the top to get these standards in place,” says Elsener. “I hope we can get it done.”