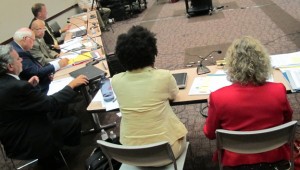 But Ritz tells Lakeshore Public Media‘s Steve Walsh those meetings dropped off after Pence announced the creation of a new state agency to oversee workforce development. She says CECI is to blame for the ongoing dispute between her office and the State Board of Education.

“The board now has its own staff that work under the CECI,” Ritz told Walsh. “So the board staff are — in my opinion — what I would call interfering with the operations over here at the department.”

Ritz and Pence met Tuesday and agreed to bring in the National Association of State Boards of Education to help mediate the ongoing dispute. It’s a move Ritz wholeheartedly supports.

“I don’t have any problem with having that association working with us as a board,” says Ritz, adding that Indiana rejoined the group during her time in office. “That’s really one of the main reasons you join NASBE — to make sure you have access to resources that they can provide.”

But others have questioned whether NASBE can remain impartial. Indianapolis Star reporter Barb Bergoetz tweeted:

It’s preferable for state supts to be appointed, not elected, says Kristen Amundson, head of group advising IN St. Ed. Board @Ritz4Ed. Hmm.

Not sure how NASBE, who will be facilitating next #INSBOE meeting, can be 100% impartial while vocally against Ritz being Chair. #INedchat

Republican legislative leaders have said that if Ritz and the State Board of Education can’t work out their differences, state lawmakers would consider removing her as board chairwoman. Ritz wouldn’t speculate on the possibility, but she did say she predicts a legislative push to codify the responsibilities of the CECI. The new agency was created with an executive order in August.

CECI Co-Director Claire Fiddian-Green told StateImpact last month it makes sense for staff for the State Board to be budgeted under its own line item, not the Department of Education.

“What is different is that the funding for the State Board was within the Department of Education’s budget,” says Fiddian-Green. “So it was almost like the department was the fiscal agent for that funding.”

There are three board meetings on the calendar for December — a strategic planning session Dec. 3, a regular business meeting Dec. 4 and a second meeting Dec. 20 to determine A-F letter grades for schools.