Left: Advocates for closing Union Junior-Senior High School and Dugger Elementary sat on one side of the gym wearing North Central High School colors. Right: Proponents of keeping the two schools open sat on the other set of bleachers.

At Monday’s Northeast School Corporation Board of Trustees meeting, proponents of keeping both Union Junior-Senior High School and Dugger Elementary open sat on one set of bleachers. Advocates of closing the two schools for the good of the corporation sat on the other.

And in the middle of the North Central High School gym stood Indiana State Troopers tasked with keeping the peace among the more than 700 attendees.

This much is clear: The district will have to act soon, or risk running out of money. But the two groups that presented Monday night have a very different vision for what should happen next.

Chriss Jobe, speaking on behalf of the Save Union High School group that formed earlier this month, says the possibility of closing the two Dugger schools blindsided community.

“To think that Farmersburg, Shelburn, Hymera and Dugger communities could have woken up less than two weeks ago and heard on their news that their school — that is most likely the heart and lifeblood of their community — was in store for some major changes, without prior public disclosure, is somewhat astonishing,” Jobe told the Board of Trustees. 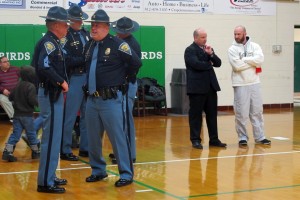 More than 30 law enforcement personnel provided security at the Northeast School Corporation Board of Trustees meeting. Attendees had to pass through a metal detector before entering the North Central High School gym.

About a quarter of the district’s 1,300 students go to Union or Dugger, and proponents say nearly all would leave the Northeast School Corporation if forced to consolidate. That would lower the amount of money in the school’s general fund because money follows the student in Indiana.

Currently the district is running Union Junior-Senior High School at a deficit — the per pupil cost of keeping the school open is about $3,000 more than at North Central. But representatives from Save Union High School say some of those costs can be accounted for in how the district pays for utilities and other services at the combined K-12 building.

More importantly, if the school corporation closes the two schools, they won’t be able to turn a profit by leasing the building to anyone else because ownership will transfer to Cass Township.

The loss of assessed value would hurt the amount the district could raise through property taxes, says Save Union High School proponent Greg Ellis. Instead, he’d like to see the district pursue a referendum on the May ballot. Raising taxes by 7.5 cents per $100 of assessed valuation would generate about $650,000 annually for the school corporation — enough to keep Union open.

“If we do pursue that, we get it on the ballot, you’re going to get a vote on which direction the people of the corporation are going to go,” Ellis tells StateImpact. “It’s not a best of five situation like you have with the individual school board members.”

Proponents of keeping the two Dugger schools open took all of their allotted 30 minutes Monday night. But Marie Hendry, presenting in favor of Save Northeast School Corporation, told the Board there was no reason to rehash a good reorganization plan with popular support.

“There are many people we have spoken to that believe to follow the proposed plan is obvious and is the right decision for our school corporation,” says Hendry. “There is no need to speak out. Silence shows approval.”

North Central Parent Lori Netherlain says she understands Union’s plight because she, too, went to a small high school — there were only 31 students in her graduating class. But her high school consolidated in the late 1980s, and she’s surprised Northeast has been able to operate six schools for as long as it has.

“Our kids are not offered a lot of the things that kids in the Vigo County or Sullivan Corporation or some of the others get because we’ve had to drop programs and not be able to add programs that the other schools have just because we don’t have the funds for it,” she says, adding that kids are leaving Northeast for the technical and vocational programs bigger districts can afford to offer.

The board ended Monday’s meeting after presentations from both groups. Members will meet again Friday to consider the two proposals.