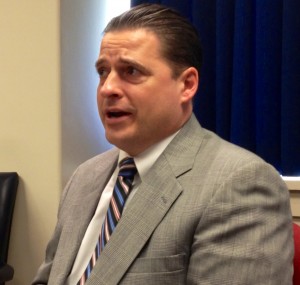 Indiana Democratic leaders fear lawmakers may push to strip Superintendent Glenda Ritz of some authority in the upcoming legislative session.

Though statehouse Republicans have said such a move is not likely, House Minority Leader Scott Pelath’s prediction comes in the midst of an ongoing conflict between Ritz, the State Board of Education and a new agency created by Governor Pence.

Ritz has criticized what she perceives as a push by the State Board and the newly-created Center for Education and Career Innovation to wrest control over education policy from her department.

“They’re creating this political soap opera so they can just go, ‘Oh, look how political this is,’ and then use that as a reason to try to strip her of powers and maybe even eliminate the office one day altogether,” says Pelath.

But he says the legislature must find a bipartisan solution to the conflict between Ritz, the State Board and Pence’s new agency.

“And while there’s an argument over who’s in charge of education policy, our state’s constitution clearly gives that task to the elected legislative bodies in this chamber and the Senate,” Bosma said.

Bosma says it’s time for both sides to put aside their personal and political differences and move education forward.