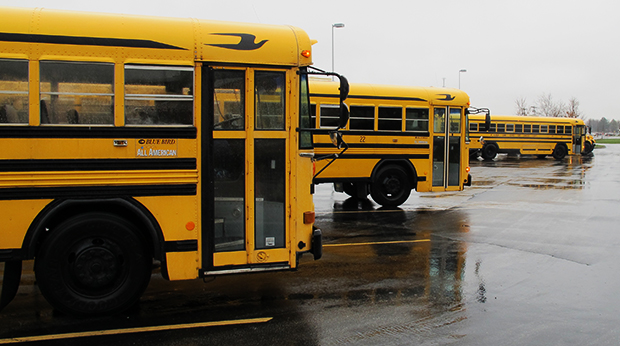 Buses lined up waiting for students at a school in Hancock County, Indiana.

It’s normally an election off-year, but Michigan City, Mishawaka and Goshen‘s school districts are joining Muncie in paying the costs of holding special elections to ask voters to raise their own taxes for additional school funding.

In Muncie, officials say their referendum’s failure at the ballot box Tuesday would force them to eliminate transportation services to offset the loss of more than 40 percent of its property tax revenues to constitutionally-enshrined tax caps.

“We’ve got half-empty schools, half-empty classrooms. We’ve got to do some consolidation,” says local business owner and referendum opponent Chris Hiatt, adding later, “If they’re going to try and come out and get more taxes, it’s only right that they make the full exercise of due diligence and a good faith effort to cut costs first.”

Muncie’s school board is considering closing one of the district’s two high schools, but Burkhart says the cost savings wouldn’t be immediate.

Burkhart explains the impact of the district’s tax cap losses have been exacerbated by state laws that will eventually require districts to use property tax dollars to pay down obligations to pensions and debt first. Those requirements could hurt Muncie’s other property tax-supported funds, including the district’s busing fund.

“We’re going to have to find a way to function with a loss of 89 percent of our transportation fund, and the only option I see here for us is a referendum,” Burkhart says.

The timing isn’t ideal for Muncie Community Schools, which will have to pay Delaware County election officials $40,000 to hold Tuesday’s vote because the district’s referendum is the only question on the ballot.

It’s a cost three other districts are willing to pay in an off-year:

Seven school corporations have already asked voters to raise their own property taxes this year. As our Referendum Scorecard shows, voters in five of those districts approved the measures.

The year following a presidential vote is normally considered an off-year in Indiana, with no state offices to elect and few municipal questions to put before voters. In 2009, with 21 school questions on the ballot in an “off-year,” voters in only six districts approved a referenda.

Check back for posts on tonight’s election results. We’ll update our Referendum Scorecard, too.