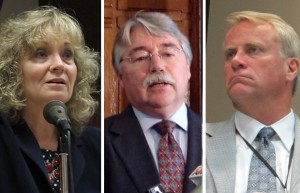 But the legal team representing Ritz — who’s accusing members of the State Board of Education of meeting in secret, violating Indiana’s open meetings laws — will first have to convince Judge Louis Rosenberg not to throw the suit out of court altogether.

But saying State Board members have “collectively overstepped their bounds” and arguing Zoeller’s point is moot since he can’t represent both sides in the case, Ritz says she won’t back down readily.

The case, after all, is about more than whether the State Board’s letter requesting the help of a legislative agency in calculating A-F grades violated Indiana’s Open Door Law.

It’s the latest escalation in an ongoing struggle between Indiana’s top elected school official and the Center for Education and Career Innovation — an agency Gov. Mike Pence created this year to oversee the State Board — for control over the direction of education policy in the state.

The Marion County Circuit Court has scheduled a hearing in Indianapolis at 1:30 p.m. Eastern Tuesday. Follow @kystokes for updates and StateImpact for posts later in the day.