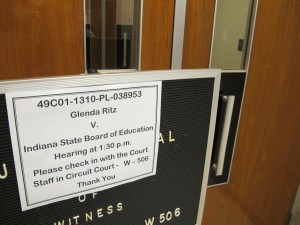 A Marion County judge could decide as soon as Friday whether state superintendent Glenda Ritz‘s legal challenge against members of the State Board of Education can move forward.

Ritz filed the lawsuit late last month against members of the panel she chairs, alleging they violated Indiana’s open public meetings law — a charge the State Board denies.

Tuesday’s oral arguments, though, focused on whether Ritz had the authority to file the lawsuit at all. Lawyers for Indiana Attorney General Greg Zoeller argued their office has the sole authority to prosecute and defend suits against the state.

But that’s just state law prescribing a duty of the Attorney General, not affording it an “exclusive power,” argued Indiana Department of Education lawyer Michael Moore.

He told Marion County Circuit Court Judge Louis Rosenberg the Department of Education’s lawyers sought permission from the Attorney General, but that their request was denied. Moore argued that decision was “arbitrary and capricious,” and the AG’s office can’t be given “unfettered discretion” to determine which state agencies can have their day in court.

“That’s essentially me as a lawyer telling one client, my wife, ‘You can’t sue your husband,'” Moore said in court.

“The appearances filed in the court on behalf of the plaintiff should be stricken because only [the Attorney General] is allowed to appear in court under the circumstances of this case,” Arthur said.

Rosenberg initially told the courtroom he’d file a decision on the Attorney General’s motion to block Ritz’s suit by Friday. He said he’d allow Ritz’s attorneys to file written responses to matters discussed in the oral arguments, leaving open the possibility a decision could come next week.