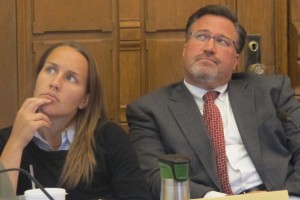 A-F Panel members Casandra McLeod, left, and Derek Redelman review the final report. Redelman was the only person on the 17-member panel to vote against the final recommendation, citing concerns about how growth would be calculated.

The State Board of Education will meet at least twice in November to consider recommended changes to the current A-F accountability system.

The governor, the state superintendent and legislative leaders asked a 17-member panel for input on how to rewrite the metrics used to assign letter grades to schools after the General Assembly sent the two-year-old system back to the State Board for an overhaul.

The biggest change: Indiana students will no longer be compared to their peers’ across the state. Under the new model, the state must measure how much individual students are growing.

“Parents are going to get quite a bit of information about the growth of their students,” says state superintendent Glenda Ritz, who co-chaired the panel. “Not only passing categories for achievement, but also knowing they’re on a good trajectory so to speak to where they need to be.”

The A-F panel’s recommendation is far from final. In fact, most of what’s going to the State Board for review is a conceptual framework. There’s no statistical modeling yet to show how the new system would impact schools’ grades.

“It will be absolutely impossible for the State Board to put into place a rule — as they are currently mandated to do by Nov. 15 — without having that data in hand,” says Redelman, the lone member of the panel to vote against adoption of the final report. “They’ve never tried to do such a thing in the past, and I really doubt this board will try to do it this time.”

Redelman says he thinks the panel made progress with discussions about how to build a better accountability model. But he thinks there’s still too much focus in the new system on whether students can pass a test and too little focus on how well schools are growing them.

If you’re curious about what’s in the final report, read on.