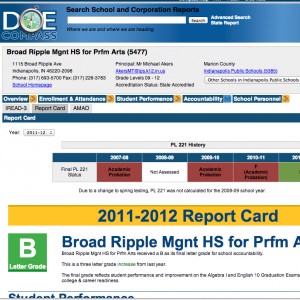 Indiana schools will have their state-issued A-F performance ratings by Nov. 22, according to a proposed timeline the state’s Department of Education sent to district superintendents this week.

Nov. 22 is also the suggested date of an as-yet-unscheduled meeting of the State Board of Education, during which the panel could approve “final letter grades for all Indiana schools.”

School officials could then submit any appeals of their letter grades over the next week. According to the memo, the State Board would approve any changes to the grades in the new year.

State education officials’ pace in calculating and releasing the grades has become central to a dispute between Superintendent of Public Instruction Glenda Ritz and State Board members.

A controversy over former state superintendent Tony Bennett’s handling of the 2012 A-F grades and widespread disruptions to last spring’s online ISTEP+ exams were certain to delay this year’s results.

But State Board members accuse the Ritz administration of moving too slowly, saying IDOE officials already have enough test score data to send schools preliminary letter grades. Ritz says her staff has been waiting for data from 55,000 requested ISTEP+ re-scores before calculating the grades, even on a preliminary basis.

The memo says IDOE officials will receive that data by Nov. 5, share their calculations with the Legislative Services Agency on Nov. 8 and release “preliminary grade calculations” to schools on Nov. 12.

According to a report from two independent policy analysts, Bennett’s staff opened an appeals window on Sept. 19 and accepted appeal filings up until five days before releasing the results to the public.