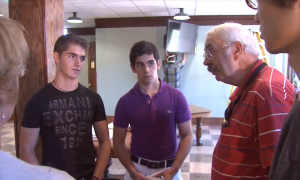 State funds don’t cover their educations — but the exchange students are willing to pay, in some cases, “$10,000 or more to enjoy an American education,” the Times reports:

The number of tuition-paying foreign students in American public high schools has jumped from a few hundred nationwide in 2007 to nearly 3,000 last year, according to federal statistics obtained by the Council on Standards for International Educational Travel…

The vast majority of tuition-paying international students still study at private high schools — 62,000 last year, up from about 6,000 five years ago. Most are from China or South Korea and plan to stay in the United States for college, bypassing a brutally competitive educational system back home.

While the Council on Standards for International Educational Travel’s statistics show relatively-steady levels of exchange student enrollments in Indiana’s public and private schools, at least one public school district has sought to attract international students.

This year, 21 of 34 exchange students at Kokomo High School live in those residence halls.

The rapid, largely unregulated growth in high school students studying on F-1 visas has raised concerns about the role of private recruiting companies and the safety of teenagers in the country without their parents. The companies, which typically collect thousands of dollars in fees from each student, are knocking on school districts’ doors, looking to form partnerships.

Federal law requires public schools to charge F-1 students the full cost of their educations but does not specify how that cost should be calculated. Schools usually take their per-pupil state allotment and add supplemental grants to come up with the tuition figure.

* CORRECTION: An earlier version of this post incorrectly wrote that Kokomo School Corporation built the residence halls downtown. The district, in fact, leases the buildings. In addition, we wrote 22 exchange students lived in the dorm last year, but the post now reflects the accurate figure — 13 students lived in the dorms in the 2012-13 school year. We regret these errors.