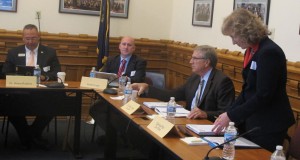 The panel tasked with drafting recommendations for Indiana's next A-F accountability system is expected to wrap up work this week.

Ritz is suing the rest of the State Board of Education over an alleged violation of Indiana’s Open Door Law. At issue is a letter the 10 appointed members of the board sent to Republican leaders accusing the Department of Education of delaying the calculation of school letter grades and asking for the state’s Legislative Services Agency to intervene.

But the fact remains both sides will have to work together in the coming weeks to hit a critical deadline in a rewrite of the same accountability system that’s causing all the tension. The State Board of Education has until Nov. 15 to adopt new performance categories aligned to the A-F scale.

Up until this point, most of the work on the rewrite has been done by a panel appointed by the governor, the state superintendent and legislative leaders. But that group is expected to wrap up their work Monday and send recommendations to the State Board ahead of their Nov. 8 meeting.

We’ve written before the State Board doesn’t necessarily have to take the panel’s suggestions, but board secretary Dan Elsener says members are prepared to listen.

“We actually will consider them very seriously,” he told StateImpact earlier this month. “We hope they do their work.”

It’s hard to say how polished the panel’s recommendation will be. When the panel first met last month, Ritz and co-chair Steve Yager said the plan was to deliver an actual accountability model to the State Board.

But at a more recent meeting, Yager compared the panel’s work to building a school, where administrators would map out how many classrooms were needed per grade but wouldn’t set the square footage for each room.

“We’re not going to have all of the details and exact specifications,” he says.