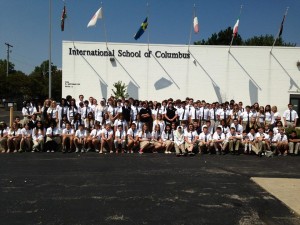 A photo from the beginning of this school year from the International School of Columbus' Facebook page.

After a last-ditch, last-minute fundraising campaign fell short, leaders of the International School of Columbus have decided Friday is the last day they’ll open their doors for students. Indiana Public Media‘s Taylor Killough reports on the school’s sudden announcement:

School officials voted to close during a special board meeting Wednesday evening.

Rich Wagner, Chair of the ISC School Board, thanked the board members, school staff, students and parents before fighting back tears while reading the charter’s dissolution. Ball State University holds ISC’s charter.

ISC planned to move into a new location, but the school was denied permit of occupancy earlier this year because it could pay for the necessary renovations. School officials say because the school couldn’t move they couldn’t expand their student body. In fact, the school lost nearly 50 students this year, which cost the school state funding.

As we noted earlier this week, the school would’ve had to close a $250,000 budget gap to remain open. But Killough reports school leaders were not willing to cover the shortfall with a loan they were unsure they could pay back.

Most of the school’s 116 students will move into Bartholomew County schools for the remainder of the year.