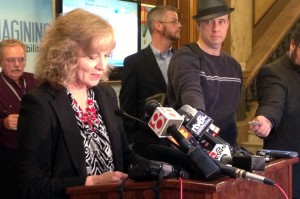 State Superintendent Glenda Ritz answers reporters' questions after filing suit against the 10 appointed members of the State Board of Education, alleging violations of Indiana's Open Door Law. Board members are asking that the suit be dismissed.

Glenda Ritz filed suit against the other 10 members of the State Board Tuesday, alleging a letter they set to Republican lawmakers last week violated Indiana’s Open Door Law. In a letter released by the governor’s office, the four board members denied that a secret meeting took place:

We did not run for elected office, but when we were called upon to serve the students, teachers and schools in this state as members of the State Board of Education, we were humbled and honored to answer the call. We would have been happy to work to better education in Indiana in relative obscurity, as we have no higher aspiration than to ensure our state and our children have access to the best education possible.

Now we find ourselves embroiled in a lawsuit. Named individually as defendants and  accused of having a secret meeting that never took place. While you have access to in-house representation, we do not.

As you know, the State Board of Education has a statutory responsibility for developing education policy in this state. We appreciate your expression on Thursday of your respect for us as individuals. We respect your role as the chair of our board and your statutory obligation as the head of the Indiana Department of Education. However, the State Board of Education is a shared governance board, and we ask that you respect our duties as board members as well.

Superintendent, you have said repeatedly that you have worked to communicate openly with us.  And yet, we have been continually frustrated by our emails and requests that go unanswered, missed deadlines, and a lack of progress on issues that are critical to the success of our students and our schools.

On Thursday, Attorney General Greg Zoeller filed a motion to block the suit on the grounds that in-house counsel for the Indiana Department of Education can’t represent the state in a dispute.

At a press conference yesterday, Ritz says she’s willing to work with Zoeller to settle the matter outside of court. But she also indicated the department isn’t backing down.

“This is a procedural manner making sure public decisions are made in public,” Ritz says. “It’s vital for going forward and making sure those aspects are in place. I view this as a very procedural piece that I have filed. It is not against individual board members personally or their expertise and how they serve on the board, but it is about how we’re going to conduct business.”

UPDATE, 4:38 p.m. EST: A fifth member of the State Board, Gordon Hendry, has sent a letter to Ritz requesting a meeting with the superintendent once the lawsuit is resolved.

Hendry, a Democrat, was appointed last month to fill the at-large seat once occupied by David Shane.

“As a fellow Democrat, I believe there must be areas where we can find common ground on education policy that will prepare Hoosier students for success in the real world,” writes Hendry.

By law, the State Board must include members of both political parties.