The potential upside of Advanced Placement courses for students is clear: Get the chance to earn college credit at greatly-reduced cost by passing a year-end exam while they’re still in high school.

Politico wrote in August that lackluster AP performance figures nationwide “challenge a widespread philosophy that students exposed to higher standards will find a way to meet them” — but others say there’s no cause for panic yet.

“I’m truly hopeful and believe that what we may be simply dealing with are growing pains,” says Derek Redelman, vice president of the Indiana Chamber of Commerce.

The College Board administers exams nationally for 34 different subjects every May. Students have to earn a 3 or better on the exam’s 5-point scale for the College Board to consider them “passing.” In Indiana, this guarantees them at least some credit at Indiana’s public colleges.

As the Indianapolis Business Journal points out, Indiana lawmakers tripled the amount of state money available to pay for students’ AP tests. State dollars now cover the $81 exam fee for every student who sits for a math or science AP exam. In other subjects, low-income students can get state help in paying the testing fee.

“We need to do what we can to provide practical experiences for our students for them to be successful,” says teacher Danielle Tooley, who has taught AP English Literature, “in some kind in some kind of postsecondary program, whether it’s a traditional four-year college or what have you.”

“We’re making them aware that they are ready for college and careers — many students don’t know that they are, and they never had a dream that they were going to go to school. But once they see that they can be successful at this level, they find a way to make it,” Bergeson says.

‘They Don’t Have To Do Well On The Exam’

But some teachers also question the way state lawmakers set up incentives for students who take the courses and their corresponding tests.

For instance, students can complete two Advanced Placement courses towards Academic Honors on the state’s Core 40 high school diploma. They’re also required to sit for the year-end exam — but, as Bloomington teacher Matt Hoagland points out, they don’t have to do well on it.

“That has been, I think, a less-than-well-thought-through policy coming out of the state,” Hoagland, an AP European History teacher at Bloomington High School South, tells StateImpact. 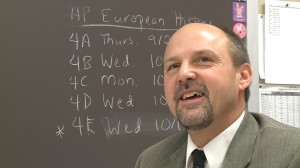 Hoagland says he hears complaints from fellow AP instructors that more students are showing up in their classes, but not all of them are ready for the AP coursework.

“A significant number of kids are taking the AP class, and they’re learning a lot of good stuff from that and that’s fine, but when they’re going in and taking the test, and they’re not putting any effort into it at all, so there’s been an explosion of 1’s out of 5 that have really lowered scores,” Hoagland says.

Other critiques of AP have emerged as well, like John Tierney’s argument in The Atlantic that Advanced Placement courses “are not, in fact, remotely equivalent to the college-level courses they are said to approximate.”

But Redelman says Indiana should look to schools that are having success with AP programs as potential models for the rest of the state.

“We are getting more students to enroll in AP,” Redelman says, “and that’s a good thing because it gets them into more rigorous coursework.

“But,” he adds, “it appears that we need to do more work to achieve the higher pass rates that we all want.”