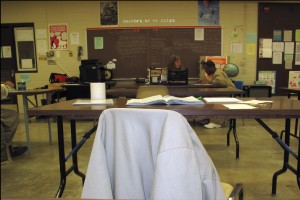 Students in Dawn Grage's GED classroom are trying to pass the high school equivalency test before it changes next year.

Beginning Jan. 1, the GED, a high school equivalency credential, will be dropped in favor of a new, more rigorous GED test, developed by Pearson VUE Testing and the American Council on Education. It’s the largest overhaul in the test’s 69-year history.

But the switch could still be frustrating for those who have been dragging their feet. If someone has passed four of the five GED subtests, for example, and the window passes, they’ll have to completely start over.

We wrote last month that Indiana is moving away from the GED in favor of a new test from CTB/McGraw-Hill, called TASC — the Test Assessing Secondary Completion.

At the time, spokesman from the Department of Workforce Development told StateImpact the new exam is a better indicator of college- and career-readiness, which is what employers are looking for out of a high school equivalency program.