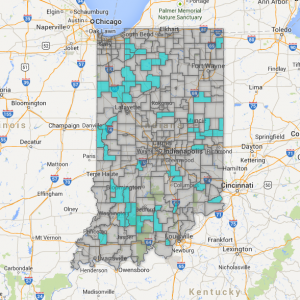 Take a look below at our map showing the 51 Indiana school districts enrolling fewer than 1000 students.

Community pressures, long bus routes, fears over who makes budget decisions — all reasons why many Indiana school corporations have not heeded a call from the state’s political leaders for more districts to consolidate.

In 2007, then-Gov. Mitch Daniels commissioned a report calling on districts to consolidate in order to save money and, the report said, use tax revenues more efficiently, recommending Indiana districts enroll no fewer than 2,000 students.

But since then, Stateline reports the number of school districts in Indiana has decreased by only two — just two pairs of districts have gotten hitched — leaving more than 50 districts across the state with fewer than 1,000 students.

The “shotgun marriages” Stateline mentions between districts in other states gave us an idea for our next “Friday Doodle.” Take a look below at our map of districts that enroll fewer than 1,000 students. For the sake of a fun discussion, could any of these districts be good candidates for consolidation?

Which of these districts would you urge to consolidate? Let us know in the comments section.

Of course, there are plenty of good reasons for districts to stick it out on their own, as a team from IU’s Center for Evaluation and Education Policy noted in 2010.

“More evidence suggests that further savings and efficiencies can likely be realized through shared services and joint purchasing by school districts,” the CEEP report reads.

The 2007 report, known as the Kernan-Shepard report, does not advocate closing schools — one of the common fears about consolidation.

“Indiana has too many school districts and administrators, but Indiana does not have too many schools. We recommend retaining geographically dispersed schools to allow districts to maintain optimal class sizes and serve local populations and needs,” write the report’s authors, former Gov. Joe Kernan and the Indiana Supreme Court’s then-Chief Justice Randall Shepard.

But the CEEP researchers point out district consolidation may not actually make more efficient use of taxpayer dollars:

“Consolidating does not inherently produce these benefits and may generate additional costs,” the researchers write. “The costs associated with consolidation may include additional busing, new facilities, and ‘leveling-up’ salaries to that of the higher paying district or school.”

In other words: Play matchmaker in the comments section — just for fun — but remember consolidation is complicated.