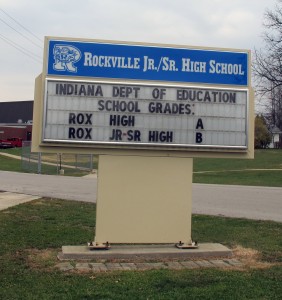 Since the the nation’s one-room schoolhouses began banding together a century ago — and as the districts they formed have merged and merged again — Stateline’s Maggie Clark points out the number of school districts in the U.S. has been dwindling for generations.

But after dropping from more than 108,000 school districts in 1942 to under 13,000 in the U.S. today, Clark writes the once-precipitous decline in that number has slowed.

This, despite proddings from political leaders in Indiana and elsewhere. Though Gov. Daniels commissioned a report in 2007 effectively calling on dozens of districts to consolidate, Stateline reports the number of Indiana districts has dropped by only two since then.

After all, there’s much community history wrapped up in local schools — and closing buildings is one of the key ways consolidation promises to save money.

Consider our story about the Rockville and Turkey Run school districts, where voters decided to “reorganize” the schools into the North Central Parke School Corporation. But while the schools merged administrations and governing boards, the district still operates two high schools.

North Central Parke is one of more than 160 Indiana school districts whose enrollments remain below a “minimum” enrollment target of 2,000 students recommended in that 2007 report Gov. Daniels commissioned. (It’s called the Kernan-Shepard Report.)

More than 50 school districts in the state enroll fewer than 1,000 students.

When a team from IU’s Center for Evaluation and Education Policy explored the subject in 2010, the researchers looked into district finances, but also compared students’ academic performance in smaller and larger districts. The CEEP team concluded districts were better served by working with neighboring schools to set up shared purchasing agreements or split administrative duties.

“A compelling case does not exist for mandated school corporation consolidation,” the researchers wrote. “Perhaps a stronger case exists for deconsolidation of the state’s largest districts.”