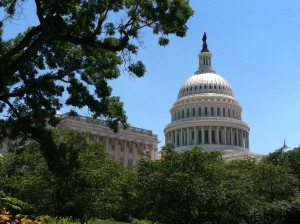 If midnight passes without a deal, the shutdown would threaten to kink the flow of federal education funding that makes up about 8 percent of the average Indiana school district’s budget.

And as if we needed another cataclysmic budget deadline to worry about, the lights going out in D.C. could be just the beginning of school districts’ worries.

But here’s the near-term good news for Indiana schools — who receive upwards of $13 billion from the feds every year — from EdWeek‘s Alyson Klein: “A short shutdown is less of a big deal for K-12 districts than a long, drawn-out shutdown” because schools will receive October’s federal funding, shutdown or not.

Here’s the bad news: A shutdown extending “beyond one week,” federal education officials warned Friday, “would severely curtail the cash flow to school districts, colleges and universities, and vocational rehabilitation agencies that depend on the Department’s funds to support their services.”

The U.S. Department of Education would have to furlough all but roughly 250 of its nearly 4,000 employees if Congress lets the lights go out, not only jeopardizing future payments, but also causing headaches for states and schools who’ve been working closely with the feds to implement key policies.

“School districts working with the department on implementing federal waivers from No Child Left Behind requirements will find no one to answer questions,” Valerie Strauss points out on The Answer Sheet:

Over 14 million students receive student aid, in the form of grants and loans, at over 6,600 schools through Pell Grants and Direct Student Loans, and if a shutdown is prolonged, the payment of this money could be delayed because there won’t be enough people to process the payments. Other programs, such as Race to the Top and Promise Neighborhoods, are funded by Congress only through Dec. 31.

School lunches will “continue operations into October,” the U.S. Department of Agriculture says.

The immediate impacts of a government shutdown, however, might be the beginning of school districts’ worries if lawmakers cannot make a deal that would raise the nation’s debt limit.

“Failing to raise the debt ceiling would be much, much, much worse for the economy, [economists] argue, than a temporary shutdown,” Annie Lowery writes at Economix.

The feds are slated to hit the debt ceiling in mid-October and a default — even a brief one — is likely to have major ramifications.

“That’s a much more serious, broader economic concern,” said Clare McCann, a policy analyst for the New America Foundation. A downgrading of the U.S. credit score, which happened the last time the country nearly defaulted, could have implications for districts’ credit ratings, for instance.

And if a default shakes the overall economy, schools could feel a serious squeeze, she added. Districts were largely able to blunt the impacts of sequestration (those across-the-board cuts to domestic and military programs) in part because the brightening state and local fiscal forecast meant policymakers were able to boost K-12 spending to make up for the federal cuts.