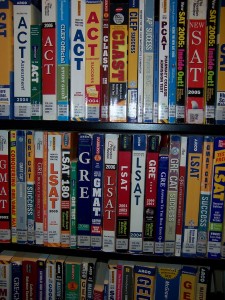 On average, students in Indiana scored lower than their peers in other states on the SAT college entrance exam.

Indiana students didn’t score as well as their peers across the country on the SAT in 2013. But is lower-than-average performance on a college entrance exam not all students take a cause for concern? Probably not, writes Valerie Strauss for The Answer Sheet:

The real question isn’t about why the scores went up or down, but whether or not the results tell us anything valuable about a student’s achievement and abilities. They don’t.

Even David Coleman, president of the College Board, the organization that owns the SAT, has for some time now been bashing his own test and promising that it is going to be substantially rewritten.

The vocabulary portion is silly, he says, because the words are too esoteric for everyday use; the essay is problematic because it doesn’t value accuracy; the math section isn’t focused enough on concepts that matter; and in a recent interview with the New York Times, he said that the newly designed exam will be focused on “things that matter more so that the endless hours students put into practicing for the SAT will be work that’s worth doing.”

Representatives from the College Board were in Indiana earlier this month to testify before the state legislature about coming changes to the test, which will soon align with the Common Core. Indiana is one of 45 states that has adopted the new academic standards, which are designed to improve college- and career-readiness, though some Hoosiers have their doubts.

But if scores on the SAT are stagnant now, they may only get worse once that alignment is complete. That’s because the Common Core standards are considered more rigorous than the expectations they replace in many states. The report the College Board released Wednesday estimates only about 43 percent of SAT test takers were actually ready for college or career.

Indiana’s previous academic standards were well-regarded. But they haven’t translated into test score gains or lower remediation rates for students entering the state’s colleges and universities.

Colleges often talk about SAT scores in terms of a “middle 50 percent” range — think of it as the bulk of the bell curve.

As an example, at Indiana University-Bloomington, the middle 50 percent of this year’s admitted freshmen scored 1,110 to 1,320 combined in reading and math, according to the admissions office. (That means a fourth of the class scored lower than that range and a fourth scored higher.)

In Indiana, the middle 50 percent of test-takers scored 860 to 1,130 in reading and math, the College Board said.