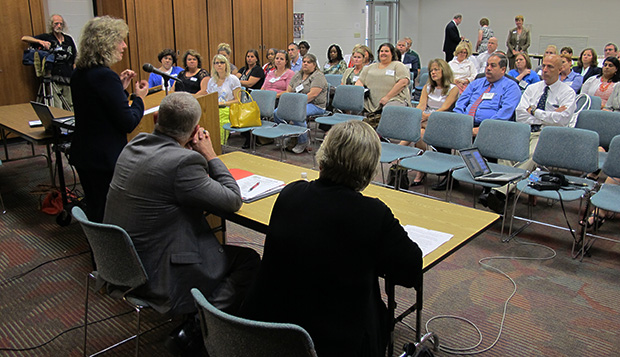 State superintendent Glenda Ritz addresses an audience of southwest Indiana educators at an Evansville public library. She was speaking at a launch event for the Department of Education's Outreach Division.

And if you think that’s a lot, wait until you see what his successor is planning.

Though not as keen on outright takeovers as her predecessor, Glenda Ritz now employs 13 “outreach coordinators” to work with schools that have posted low test scores.

Ritz wants these staffers engaging with more schools, too — primarily in 300 struggling buildings known as “focus schools” or “priority schools.” But she says she wants her staff to make contact with every school in the state.

“We’ve hired all these directors from the regions in which they work,” Ritz said at a “launch event” in Evansville for three outreach offices in southern and western Indiana. She tells StateImpact:

So [the outreach coordinators] will know their schools. When you’re dealing with focus and priority schools, it’s important to have relationships built and to know your schools, to know their school improvement plans forwards and backwards, to be able to know what types of supports are already in place and what supports we need to add to so that we’re not just coming for a one-stop snapshot because, ‘I’m here to monitor and do a report’ — no, this is real support.

Aside from helping schools craft improvement plans, Ritz says she wants the state’s liasons — and the half-dozen Indianapolis-based staffers for the Department of Education’s newly-created Outreach Division — to become resources for the schools. She wants them helping with technology, staff training, grants and community partnerships.

It’s part of a broader vision she articulated to StateImpact last November: Ritz doesn’t want school turnaround efforts to start with a state-orchestrated takeover as she charged happened under Bennett.

But when it came to accountability, Bennett drove a hard bargain during his time in office. He would play bad cop if it meant injecting urgency into the school turnaround process. But at least one superintendent says Bennett’s staff was just as effective when they played good cop.

“They made my job as a superintendent so much easier,” Steve Edwards told StateImpact in 2011. Edwards was superintendent of Marion Community Schools at the time; he’s since retired. Along with his staff, pulled the city’s faltering high school off the state’s failing list to avoid takeover.

“What [state superintendent] Dr. [Tony] Bennett did and what the DOE did was it gave me a license to do some very unpopular things,” Edwards said.

But, as she said in her interview, Ritz says her outreach policy isn’t all ‘carrot’: